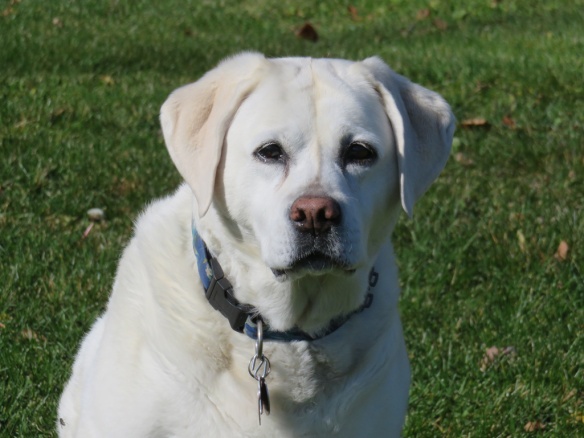 Our beloved dog Zoe died last night.  She gave us more than I can express and leaves a gaping hole in our lives.

A heartfelt thanks to everyone who has expressed sympathy over Zoe’s illness.  There’s no need to comment here as well.  I just wanted to give Zoe a remembrance.  She deserves it. 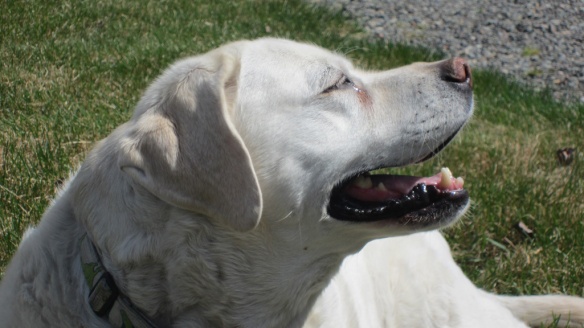 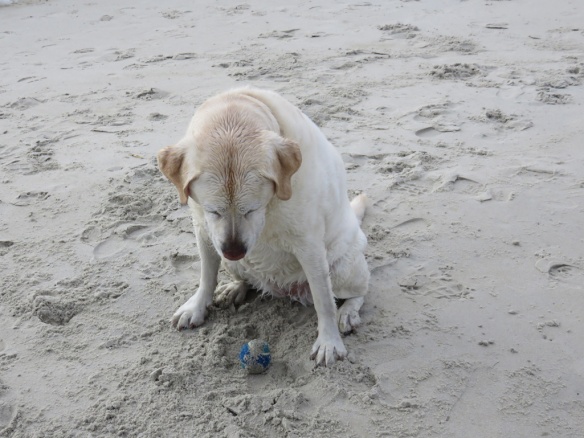 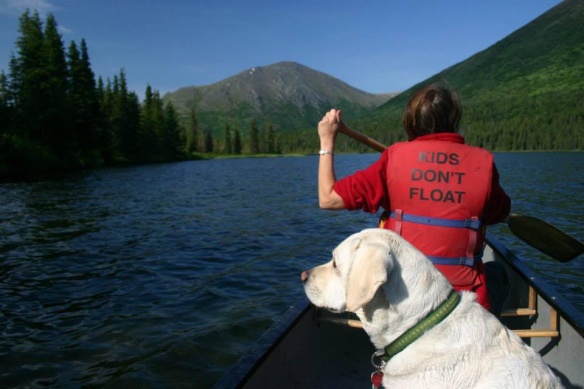 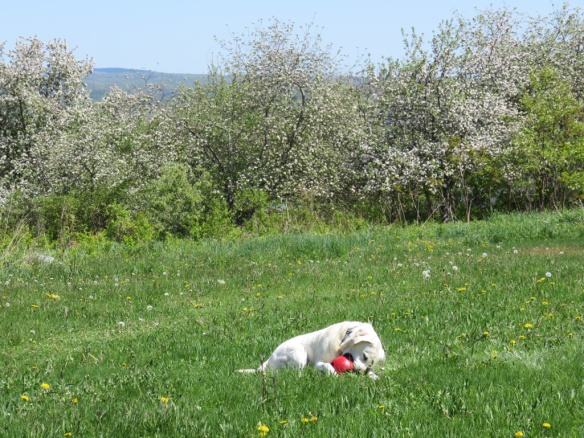 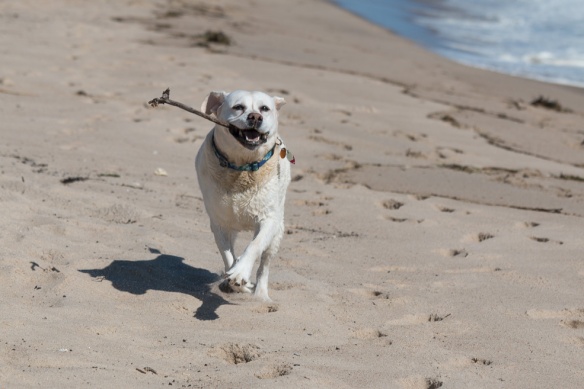 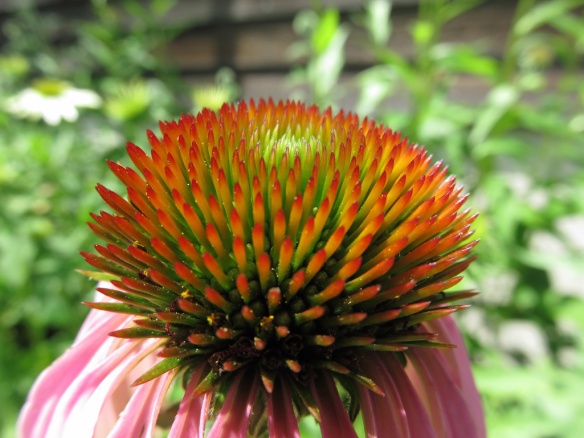 We received bad news on Zoe this week. She initially rallied on steroids but then did not continue to improve. After further tests, it appears that she does have a fast-moving cancer. So, we are staying close to home to keep our sweet girl company, just as she has kept us company throughout her life. She remains happy, although she is getting weaker and less mobile. 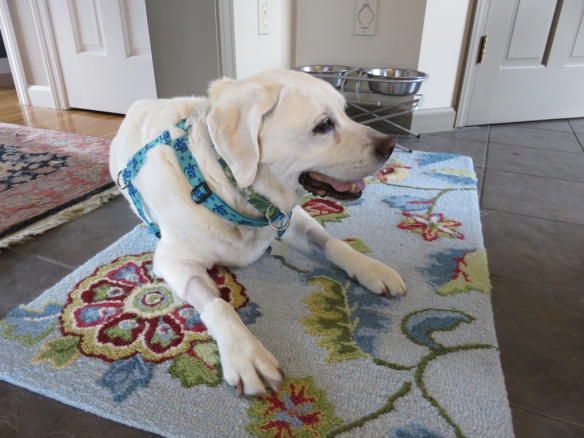 As we come to grips with the bad news, our whole property is pulsing with midsummer life. The bees were coming in so laden with deep yellow pollen last week that they looked as though they would miss their landings.

I traced the bees to the staghorn sumac, which was in full bloom and bursting with pollen.

We have several varieties of sumac on our hillside, but the bees were ignoring all but the male staghorn blossoms. 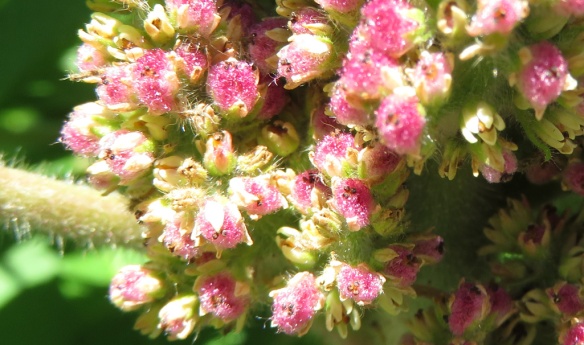 Close up of red sumac blossom, with no bees in sight.

The plentiful hairs on this bee indicate that she is relatively young. The hairs will wear off as the bee ages.  She’s in the staghorn blossoms here and has pollen even on her rear hairs.

After the sumac flow slowed, the bees were driven to a frenzy by our Flemish Antique poppies. Each poppy only lasts a day and every morning they were mobbed with wild and honey bees frantically gathering nectar and stripping the pollen. I have never seen anything like it.

Our borage, in comparison, was almost deserted.

And the bees were much less interested in our small jelly bean poppies. 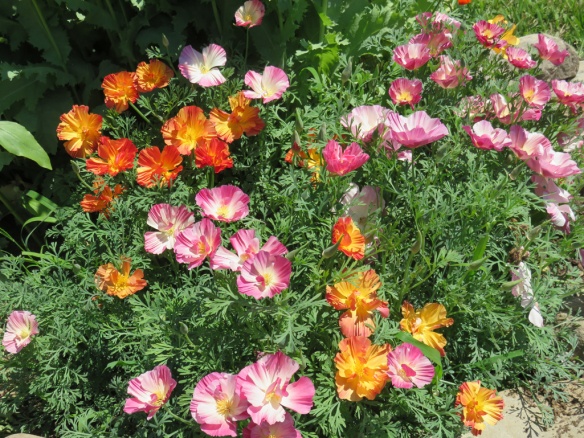 All the pollinators have been on the wild milkweed, however, which has been spectacularly lush and sweetly fragrant this year. 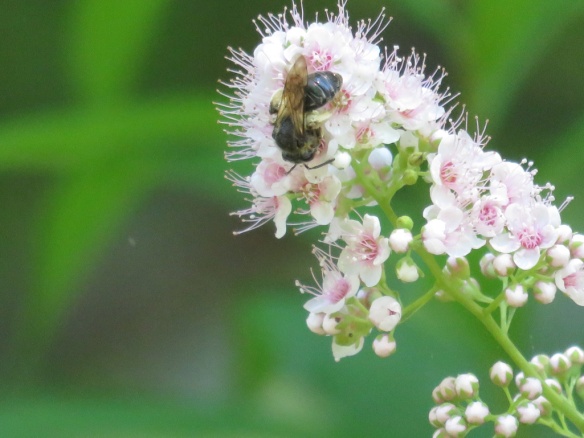 But, our baby swallows are gone.  After entertaining us for days, we watched them leave the nest one by one. It was such a thrill to see their first flights.  We still have swallows and bluebirds in the yard, so apparently they like it here. 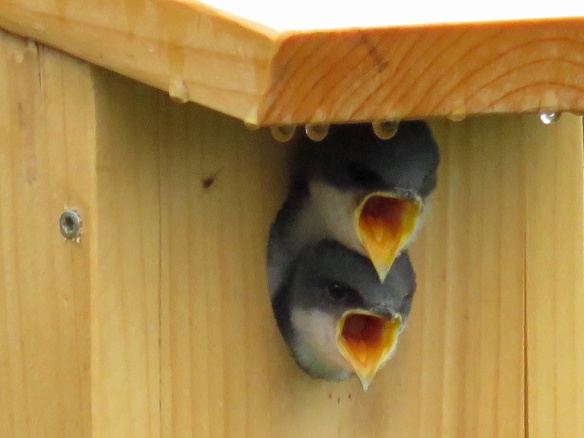 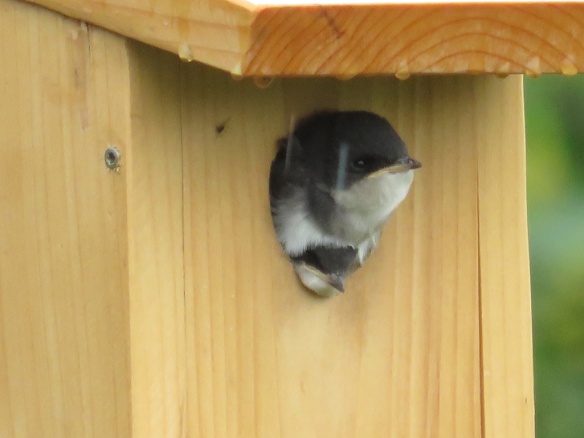 Although the weather has been extremely dry, we have had enough rain to keep most of our vegetables coming along nicely. We are harvesting peas, lettuce, early potatoes, baby onions, collards, kale, carrots, and lots of herbs. 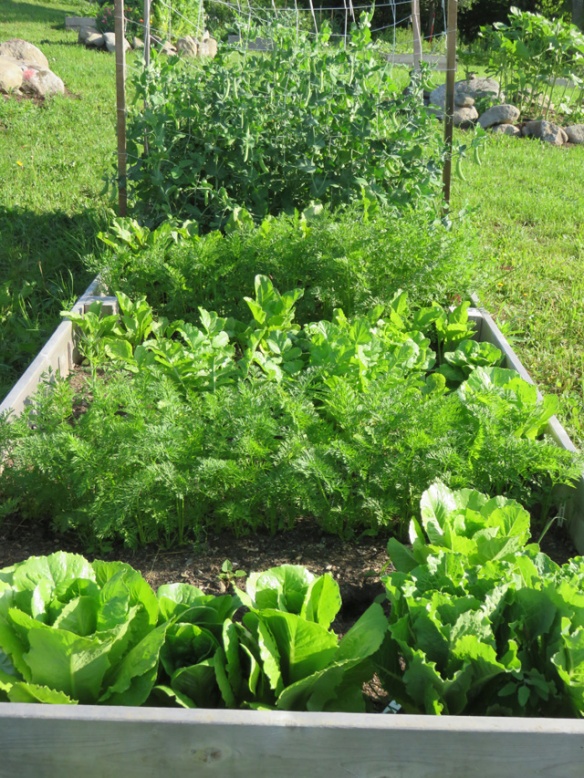 I had to pull out some cabbage being chewed by pesky cabbage worms. The cabbage moths continue to hover over all the brassicas, so I will harvest them soon and then put in a new, unmolested, bed for fall harvest and cover it with agribon fabric to keep the moths out.

Our goldfinches turned out to be unexpected garden marauders.  They have been dining on the rainbow chard. They are not eating bugs or worms, but the chard itself. Goldfinches generally eat seeds, so I’m wondering if they sought moisture from the chard leaves in our recent dry spell.

Our wild apples are plumping up and looking less disease and pest-ridden than last year. We did some pruning in the spring to cull out branches and let in more light and air. It appears to have improved the apples.

And so, life goes on. 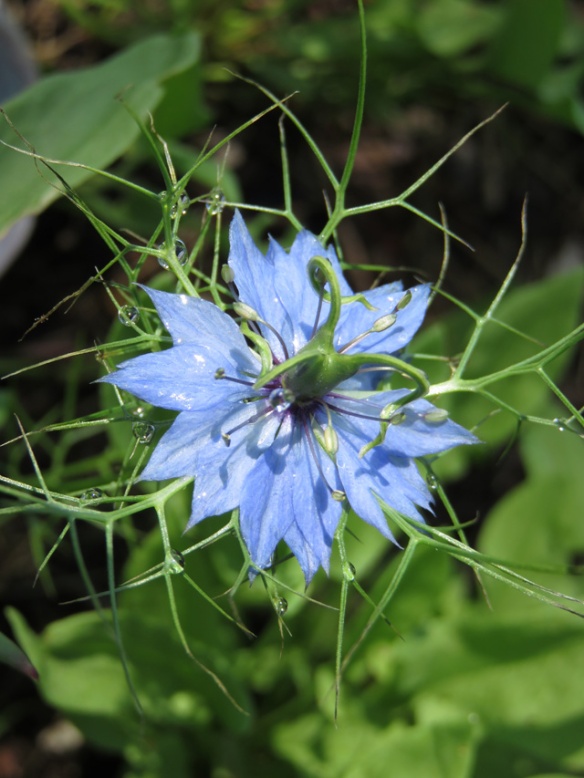 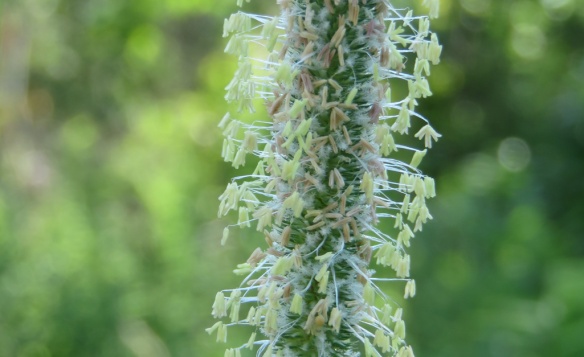 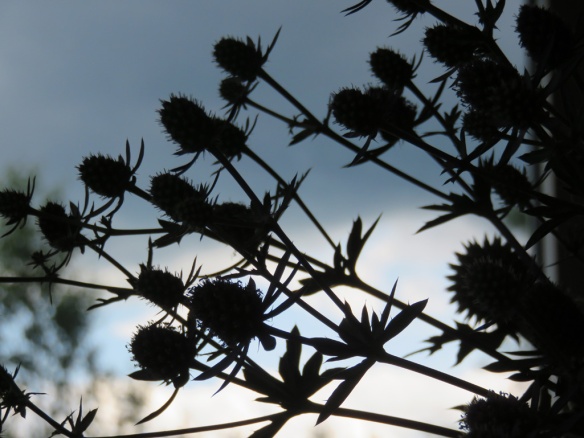 June put us through the wringer. It started out all flowers and bees. And then, as the world drama escalated with violence, Brexit, and the everpresent Donald, our world contracted to one sweet old dog–Zoe. 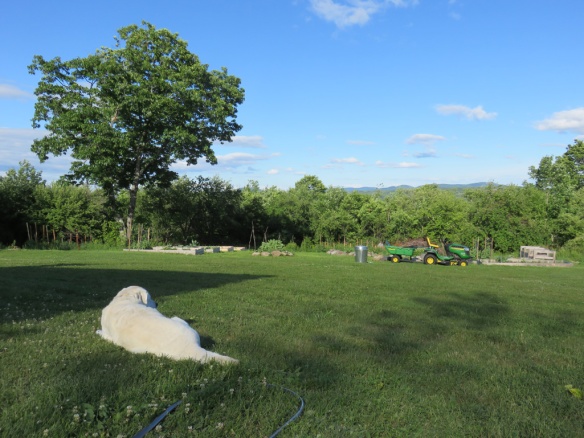 She had been showing her age this spring. Her arthritis was worsening and she became increasingly unwilling to do much of anything in the hot weather (Alaskan to the core, she has never liked the heat). The vet thought it was laryngeal paralysis, related neuropathy, and some aspiration pneumonia.

Zoe went on antibiotics and we drove to Portland, an hour-and-a-half away, for an assessment as to Zoe’s suitability for surgery for the laryngeal paralysis. Before we could even schedule surgery, however, Zoe’s condition precipitously declined. A cliff-dive of hurt. She ran a continuous fever, was in pain, and was becoming increasingly lame. It got so bad that she could barely stand up and when she did, she tented her legs and looked at us pleading “please help me” in her eyes. Eventually, she refused breakfast. Not good. Zoe always eats.

Throughout this we had several veterinarians, here and in Portland, trying to figure out what was going on. Even in her wiped-out condition, she charmed them all. After multiple trips to Portland, a stay in the doggy hospital, rounds of antibiotics, IVs, and numerous tests, it looked as if she had a fast-moving and incurable cancer. We tried to be resigned for the worst when, happily, her bone marrow test came back negative for cancer.  When Zoe then responded  well to steroids, the prime suspect became an immune-mediated condition.

We brought her home and she’s been gradually, but steadily, improving. Not quite the old Zoe, but good, nonetheless. Her blood tests today–a week later–showed improvement, so we are cautiously optimistic.

Zoe was always what you would call a good eater and the steroids have made her even more enthusiastic. She is sleeping lots but still enjoying the pleasures of food and lying in the sun. She’s been reluctant to leave the house, even for a survey of the yard. But the past few days, she has seemed more like her old self. Whatever happens, to be honest, we did not think she was going to live past last week. So, for now, we are simply enjoying her wonderful presence. 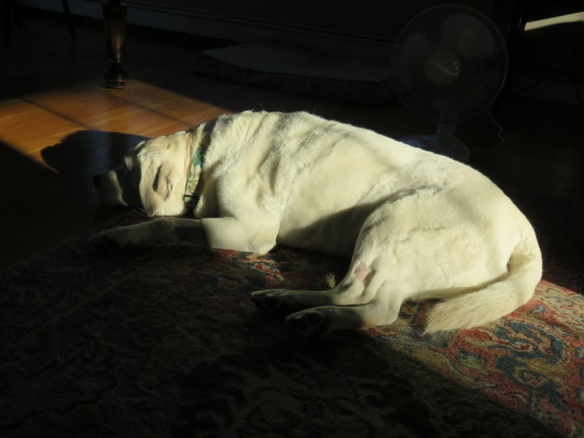 In the meantime, life goes on around us. 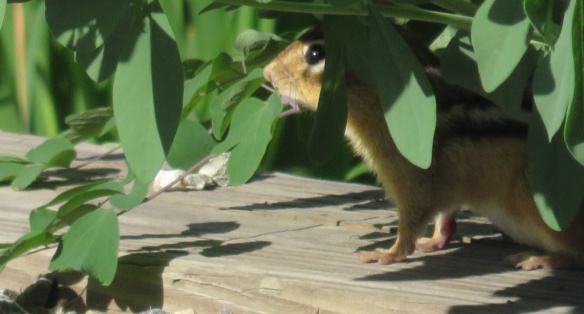 Our swallows have a second brood hatched and we sit with Zoe on the porch to watch the parents feeding their ravenous chicks. 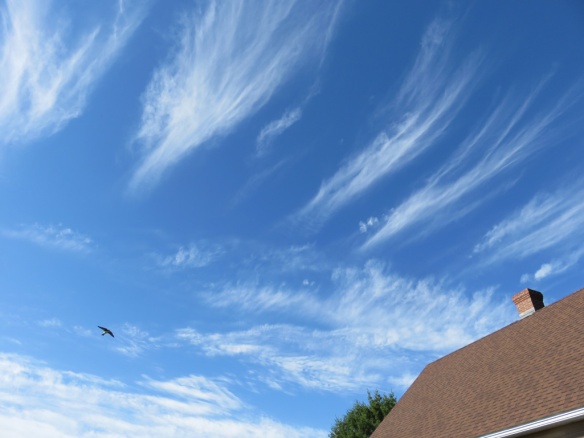 I took this photo for the clouds but caught a swallow parent swooping toward the nest box with food.

The poor parents are going continuously and I’m hoping that our cabbage worm population is going right in the mouths of those chicks. 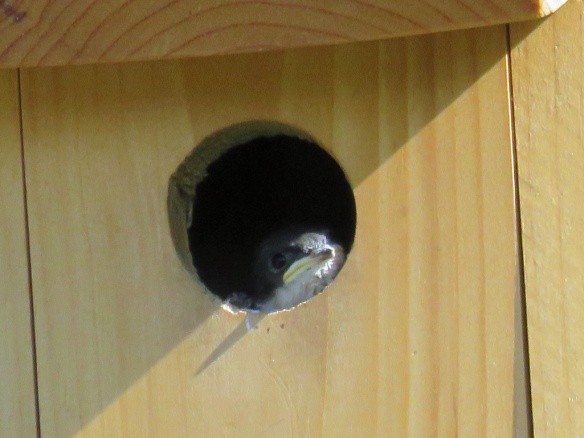 Checking out the world 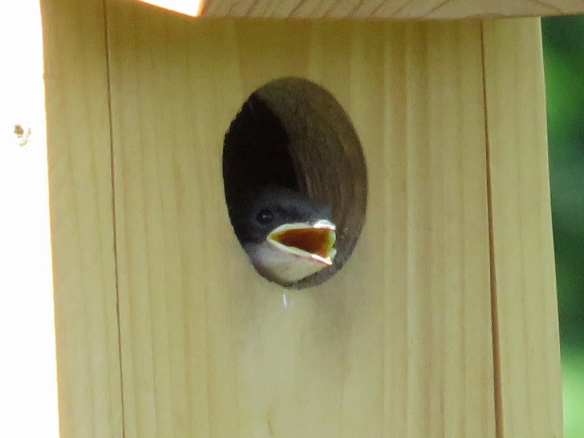 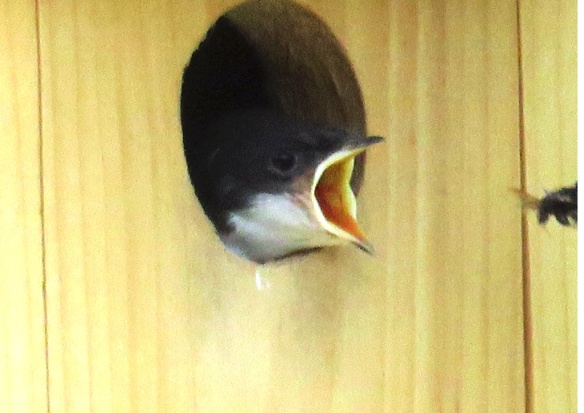 The blur at the right is an insect in the parent bird’s bill.  It doesn’t look like one of my bees (although I’m sure there have been some casualties).

Our bluebirds may have a second brood, we’re not sure. Whatever they are up to baby-wise, they are still hanging around and wonderful to watch. 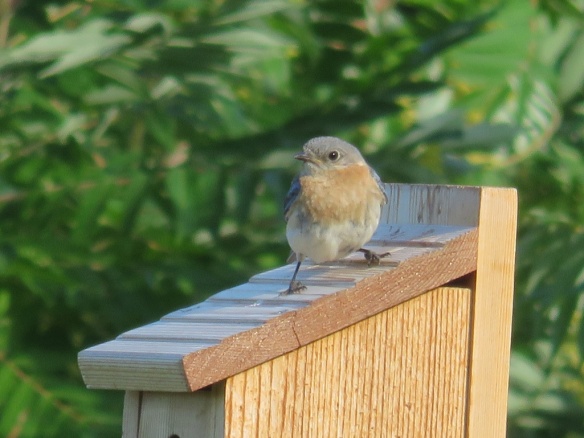 Anchoring himself in a strong wind

The garden is dry. We are woefully short of rain. But we are harvesting our early vegetables, the corn was on track with “knee-high by the Fourth of July,” green tomatoes are forming, and the potatoes are going nuts. 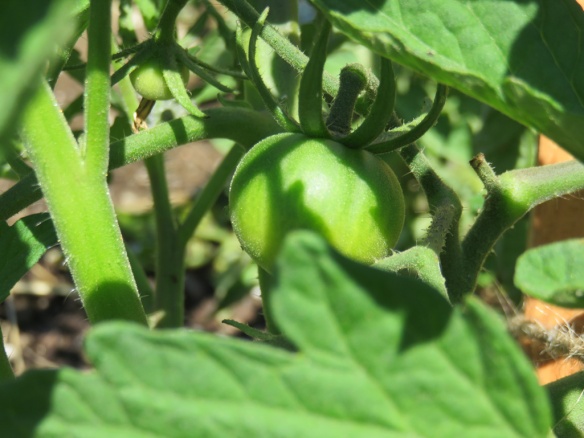 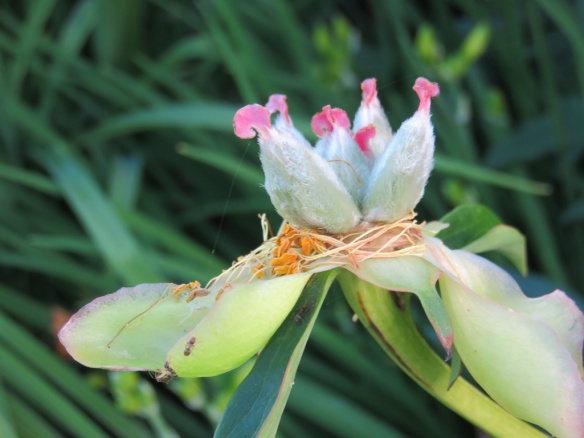 But, of course, they continue with their lovely blooms, despite whatever else happens in the world.

So July starts as June did with more flowers, bugs, birds, and summer skies. 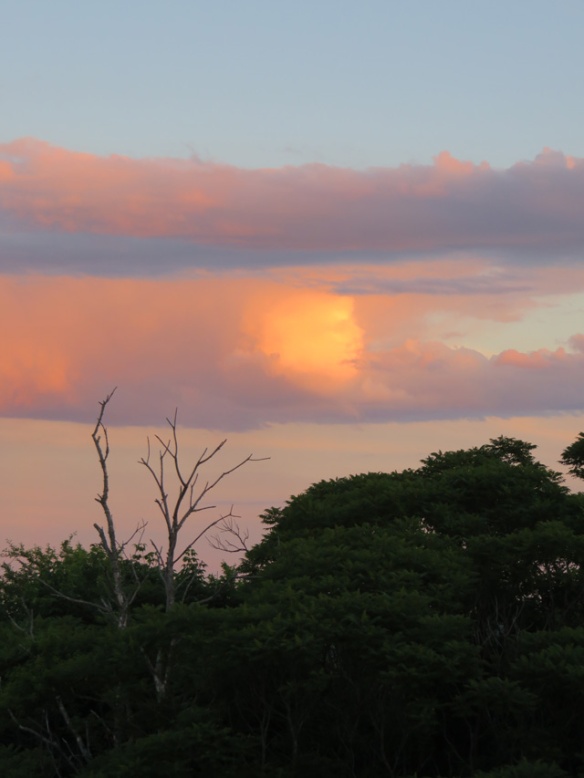 Face in the cloud 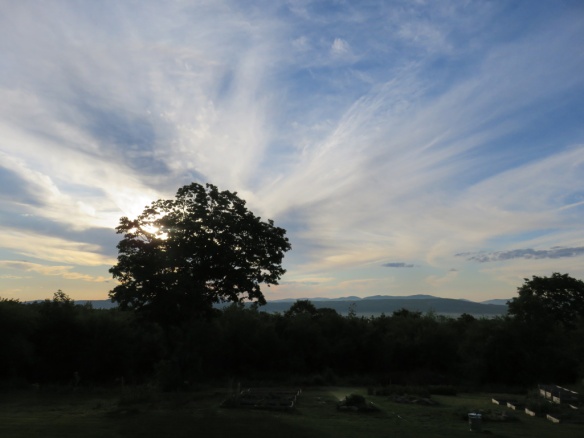 Something has twice wound the suet feeder up into the tree for easier access (maybe?).

We suspect the brown thrasher, who seems to find the suet and the hanging rope to be a personal challenge.

Our birdbath has an evening line of birds waiting to enjoy a little cool-down. 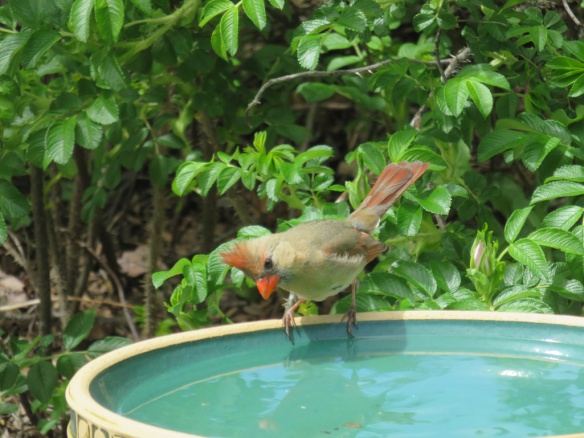 Zoe enjoys a little cool down too.