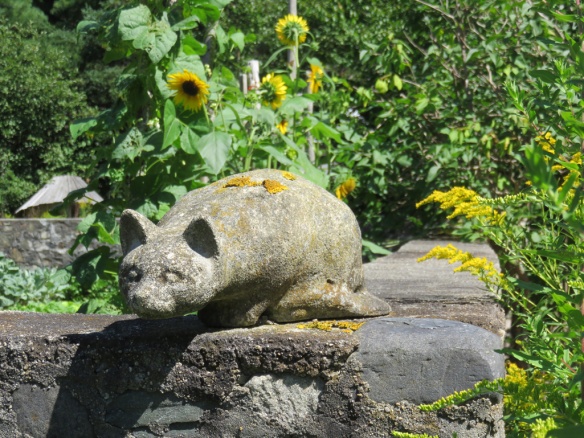 Unexpected events caused a hiccup in my blogging. First, the election addled my brain. Fueled by middle-of-the-night insomnia, it has been struggling to reconcile our good life with twilight-zone flashes of disbelief and helplessness over an increasingly bizarre new reality. I had no heart to blog about puppies and bees.

While I grappled with strategies for moving forward (hunker down? become militant? Rip Van Winkle?) my camera gave up the ghost. It just died. No photos, no blog. I had not realized how much a part of my life my camera had become. I felt as though I had lost an appendage.

I have a new camera and am trying to develop a new perspective. As I imagine the parade of horribles challenging our more-fragile-than-I-thought system of goverment, I remind myself that we have been through dark periods before.

I have been thinking particularly of Scott Nearing, likely because this summer we visited his final home, Forest Farm, about an hour-and-a-half drive from here on Cape Rosier. I have been meaning to write about that trip, which we took in August after Zoe died. Now is as good a time as any.

Scott Nearing was a pot-stirrer extraordinaire–a radical, outspoken pacifist and socialist from the time he was a young man until his death in 1983 at the age of 100. Interestingly, like Trump, he attended Wharton School of Business. The similarities end there. If you imagine Donald Trump and then imagine his polar opposite, you might come up with someone like Nearing. 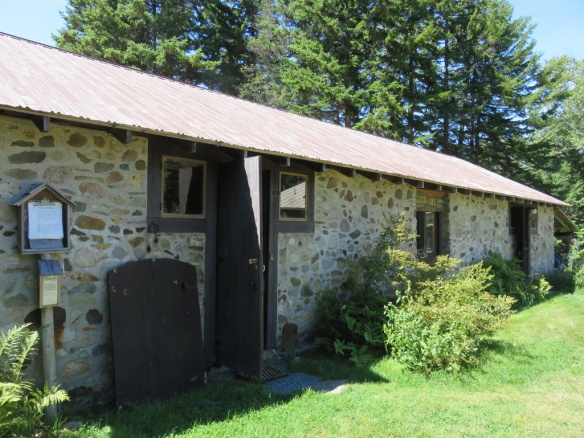 There was no flip-flopping with Nearing. He was passionate and uncompromising–believing that the wealth of the rich was founded on the misery of the poor. After graduation with a PhD, Nearing was hired as an assistant professor of Economics at Wharton. But, in 1915, the school abruptly dismissed him for his outspoken activism and stance against child labor. He fared no better in his next teaching position, fired for his active opposition to WWI, in a fiercely nationalistic climate. Nearing’s 1917 pamphlet, “The Great Madness,” criticized the war as arising from commercial interests, rather than idealism. As a result, he was indicted under the Espionage Act for alleged interference with troop recruitment. He won at trial, but was blackballed from any further university teaching. He eventually joined the Communist Party, and apparently was ejected from it, as well. Non-conformist to the core.

The alpine-style home at Forest Farm.

In the 1920s, after separating from his wife and children, he became involved with Helen Knothe, a woman some twenty years his junior (maybe he had something else in common with Trump). Helen was a non-conformist in her own right, with theosophist (some sort of mystical philosophy) leanings, and a previous romance with another strong personality–philosopher Krishnamurti.

A view of the walled garden, fruit trees, and the back of the house.

Scott and Helen moved to rural Vermont during the Depression in an attempt to build a self-sufficient, “simple” life. They gardened, built stone buildings, wrote, and produced maple syrup as a cash crop. In the 1950s, as ski areas increasingly encroached, in search of a more remote area, they moved to coastal Maine–beautiful Cape Rosier off of the Blue Hill Peninsula.

I fell in love with the walled garden. 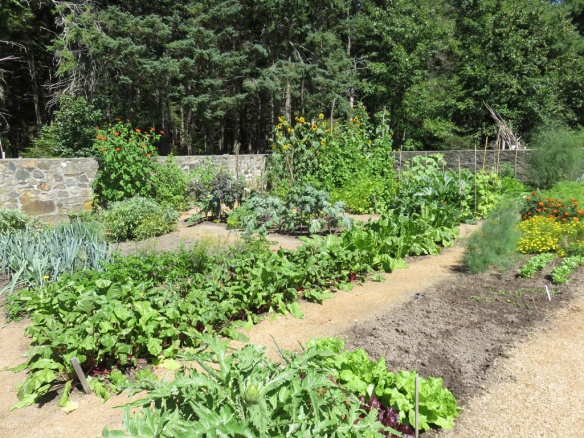 The caretakers had the garden in immaculate shape, despite the drought. 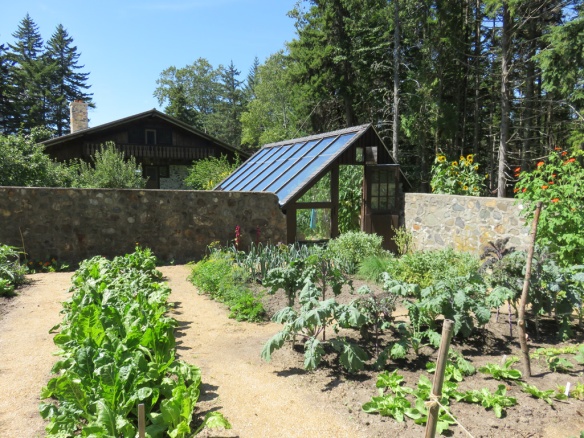 By the 1970s, the Nearings had became guru-like parent figures to many in the back-to-the-land movement. Their books, especially “Living the Good Life,” inspired mostly youthful baby boomers to attempt (some successfully, some not) to live a simpler, more self-sufficient lifestyle. 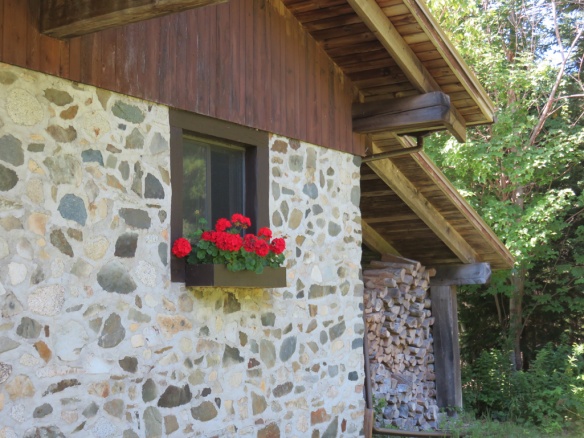 It’s hard to say how many moved to Maine because of the Nearings, but the back-to-the landers’ influence can still be felt here in Maine’s rich culture of small organic farms, small support businesses, food co-ops, seed co-ops, and farm-to-table restaurants. Eliot Coleman, now well-known for his books on four season and small-scale organic farming, was a Nearing disciple, buying land from and working with them. His daughter Melissa’s memoir of her childhood growing up in the Nearings’ sphere, poked some serious holes in the picture of the Nearings’ idyllic simple life.

We took a long look at the greenhouse.  We intend to build something similar (only better).

I attended two small college-campus talks that the Nearings gave in the 1970s.  Scott was about 90 years old then. He seemed small, spry, deeply wrinkled, and utterly committed to his beliefs–a hard knot of a man. I remember Helen as having spiky gray hair, baggy clothes, a lapful of knitting, and a sharp tongue. I was drawn to the idea of having a small somewhat self-sufficient farm, but was not particularly attracted by the Nearings themselves. I am wary of anything approaching zealotry, and found the Nearing’s strict (and, to me, bland) vegetarian diet, structured hours, ascetic approach, and unyielding ideology off-putting. And the lifestyle they promoted was not realistic for most people, especially those with children. 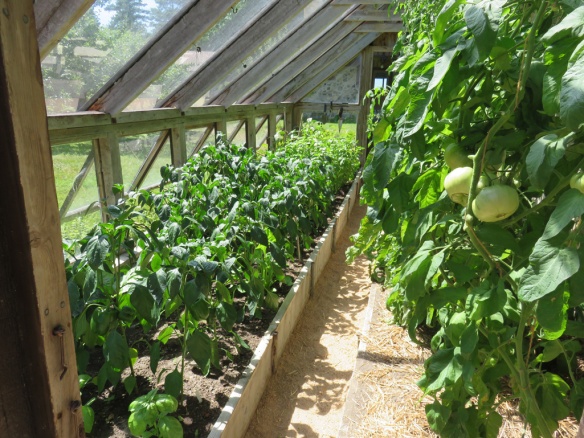 Scott died in 1983 and Helen in 1995, but the non-profit Good Life Center keeps their house and garden alive and open to visitors. I wanted to go there primarily to see the stonework in their buildings. The Nearings used a slipform method of building with concrete and stone that can be done by hand and we are thinking of doing something similar for a greenhouse wall.

A form for building the stone walls. 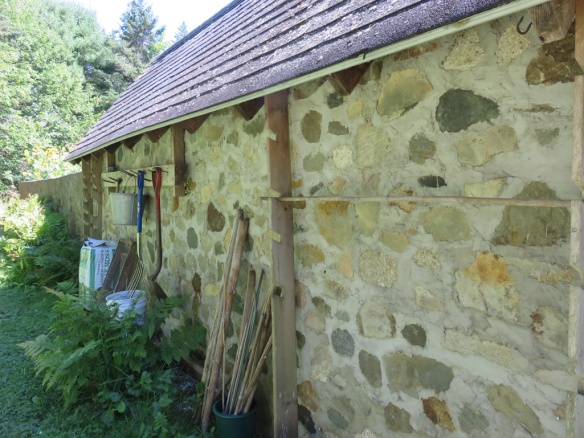 The stonework up close.

Forest Farm was the Nearings’ last house. They lived in an old wooden farmhouse during their first decades in Maine. The stone-built Forest Farm was their retirement home–so to speak–with a smallish walled-in garden, a few fruit trees, a greenhouse, and an incredible view over the water. The farm’s caretakers were a young, earnest couple who answered our questions and then let us wander around and take pictures. 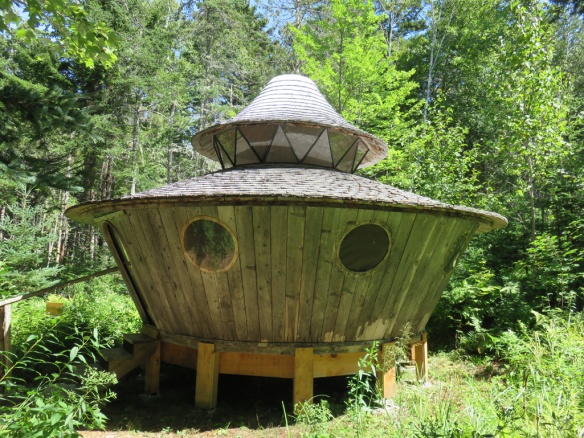 Every farm needs a yurt.

After we returned from the trip to Forest Farm, I read “Loving and Leaving the Good Life,” a book Helen wrote after Scott’s death. My view of the Nearings remained unchanged after reading the book–admiration, undermined by a nagging feeling that I did not really like them very much. Nevertheless, Scott’s life is a good reminder of some very ugly truths about this country’s history. We have recurrent cycles of nationalism, scapegoating, increasing economic inequality, and a dismal record when it comes to protecting dissent and free speech. Perhaps the cycles are inevitable. If so, the question is how to best react to keep them from becoming permanent.

Nearing paid dearly for his activist reactions and eventually chose to refuse to participate in the larger economic system by living on a small, relatively self-sufficient scale. A solution for him, but not helpful on a larger scale. I do not have any neat lessons learned from Nearing’s life. But I am working on it. 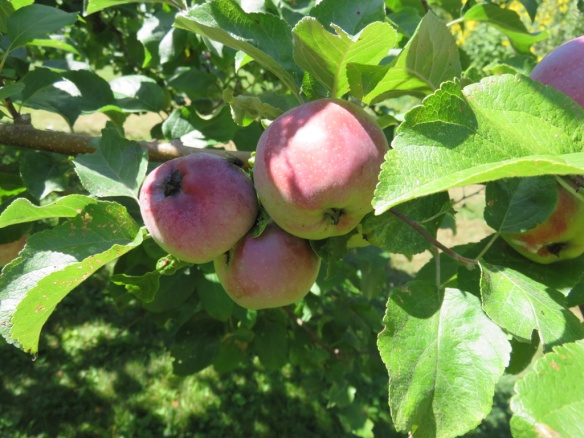 Meanwhile, back at our little farm, Capp is blissfully unfazed by politics, growing at an alarming rate, and immeasurably sweetening our good life. Back to writing about puppies. 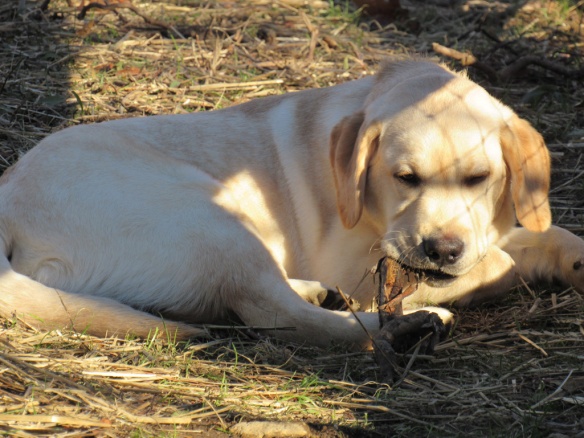 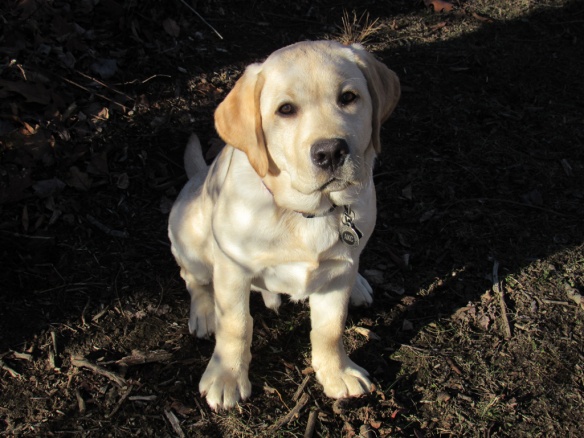 As if to compensate for the fading leaves, our late October skies exploded with color. Morning temperatures drew gauzy mists up from the lakes or created fog banks hunkering over the shore.

The sky became a brilliant contrasting backdrop to the mist and fog, as the sun rolled up over the blue Camden hills.

We have an unobstructed view of sunrise, but being on the southeast side of a ridge, do not see the sun drop under the horizon at sunset. No matter. We get a show just the same. As the old day heads toward nightfall, colors so extreme as to best be described as lurid or garish light up the western, then southern, then eastern skies. Honestly, this photo looks muted in comparison to the real thing.

October’s variable weather, golden light, and temperature inversions contribute to these remarkable bookends on the day. 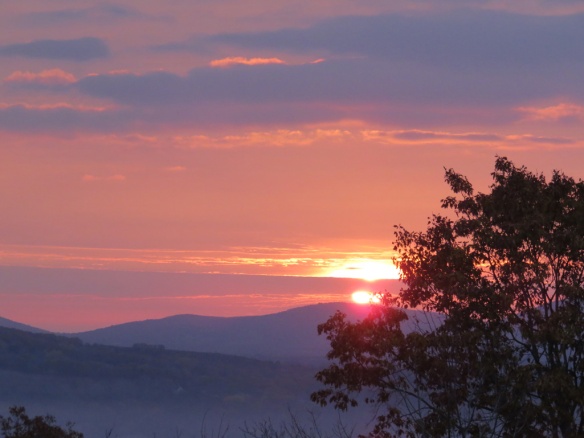 Typical for this time of year, the weather has been fickle–summery one day, scudding clouds and rain the next, followed by a bit of frost and wintry air. 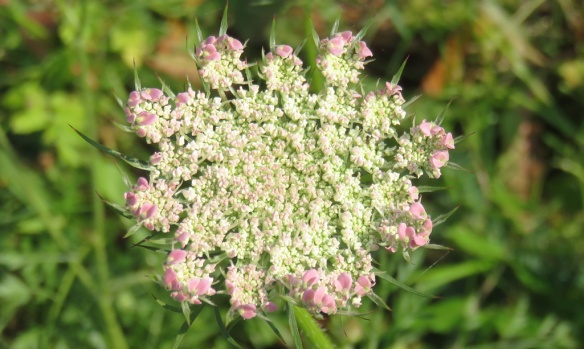 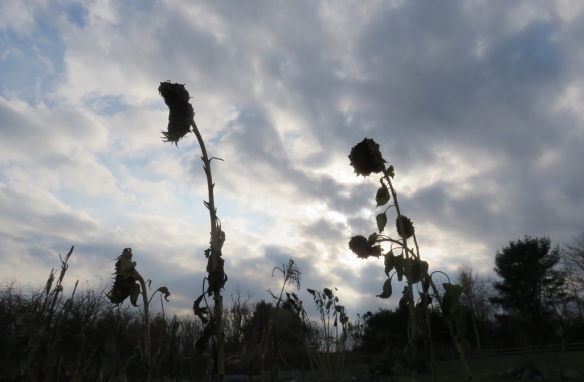 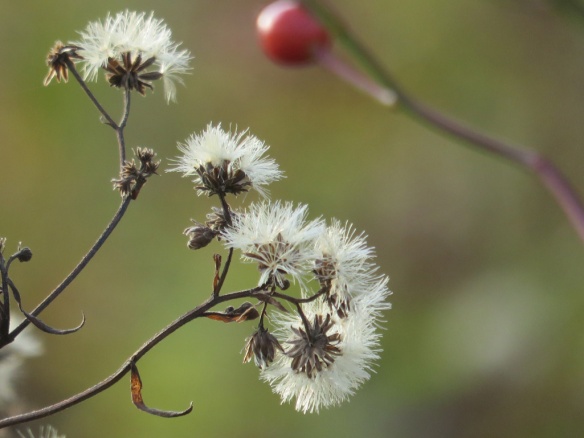 The poor honey bees do not know whether to hunker down or get out and forage.

There are still a few lingering flowers, but the bees go quickly from one to another, finding little on offer.

Some are still bringing in pollen, however. I fed them sugar water for a few weeks to help them shore up their winter honey supply. I likely will slip in a fondant patty in a week or two, strap the hive down, build a straw-bale windbreak, and the bees will be on their own until early spring.

Whether it is due to the bees’ pollination, the summer drought, or something else altogether, the fall berries are especially abundant this year. 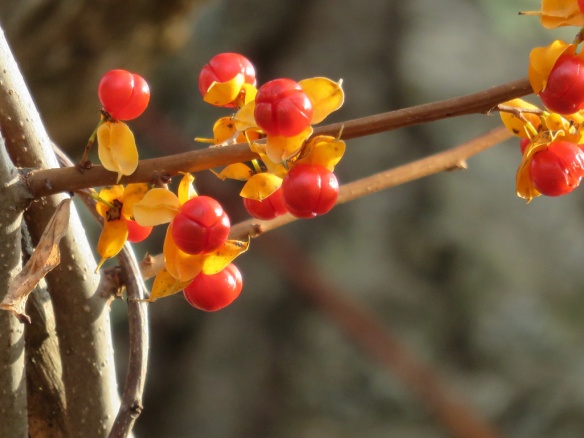 The milkweed is bursting out of its pods. 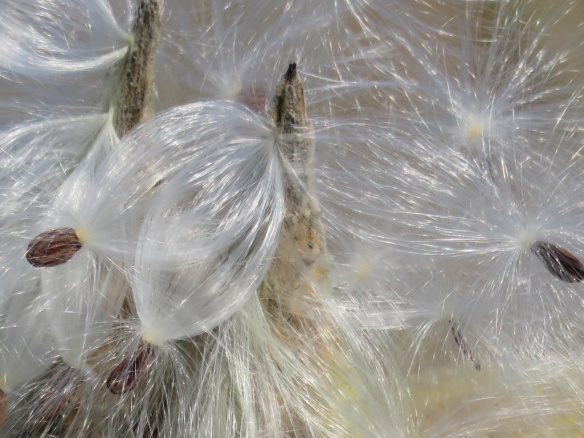 The geese are migrating so high overhead that we can hear them well before they become visible.

All kinds of mushrooms are springing up in the lawn after it rains, making me paranoid that Capp will eat some (he eats everything), vomit profusely, twitch a little, and promptly die. 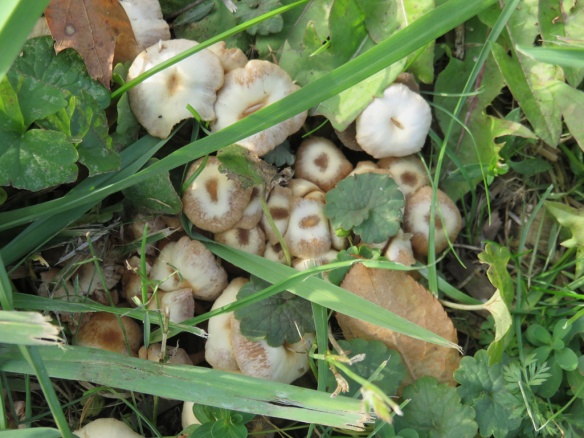 We continue to put the gardens to bed, and ready the orchard for winter. 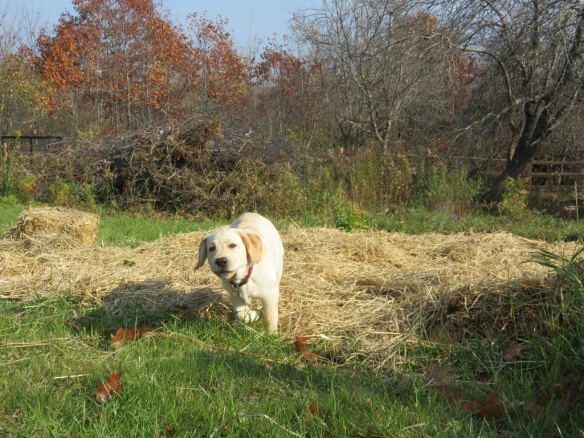 The last of the carrots and beets.

I am absurdly proud of my little orchard nursery. All of the apple grafts that I clumsily attempted at the spring grafting workshop were successful and grew into impressive little apple trees.

The grafted apples in May.

The same grafted trees in October.

Next spring we will replant them in various places on the property. We will have more area cleared and ready for fruit trees, flowering shrubs, another vegetable bed, and a sitting area with some scattered perennial and annual flowers. 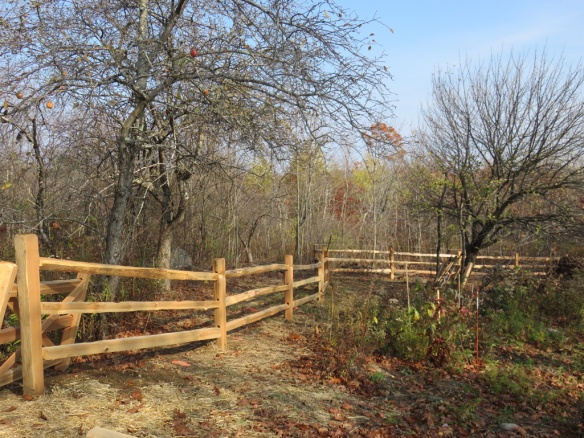 Thanks to George’s hard work, the fence is almost finished. It looks like arms enfolding our garden and orchard.

We still need to do some post leveling, attach the screen, and hang the gates. Once the fence is done, we will start looking for another dog to keep Capp company.

It has been a busy fall, tempered and bounded by very bad and very good news from loved ones. Grief, happiness, and change all mixed up together. Bring on winter. 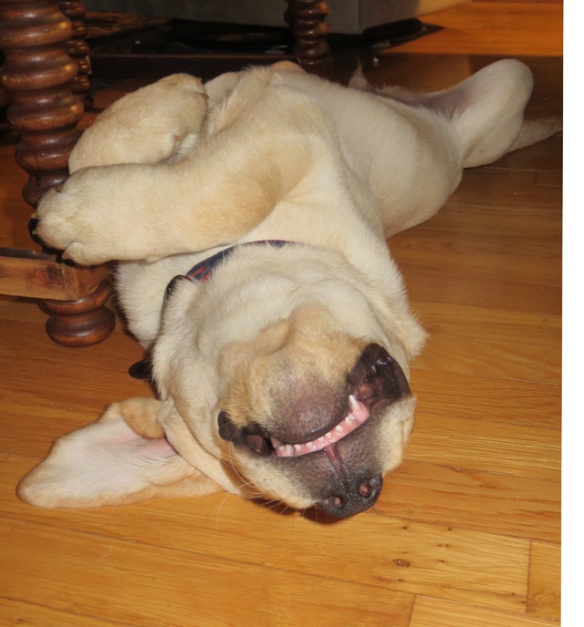