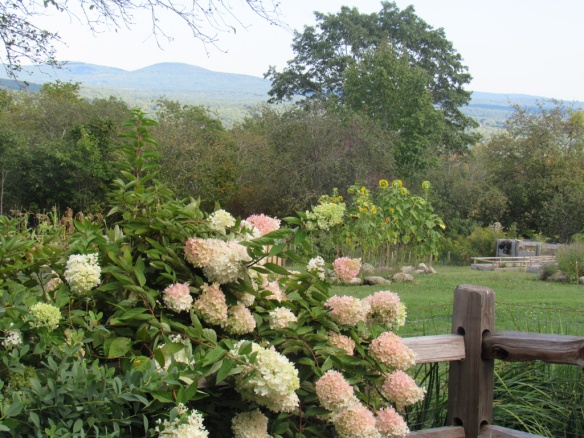 Hearing of all the weather turmoil around the world these past months, we have had an embarrassment of fine weather. It feels as if we are living on an island of perfect summer days, leading to a startling bounty of goodness to see, smell, and taste.

I only had to water my vegetables one time the entire summer and I have never in my life had gardens produce such large and luscious yields. 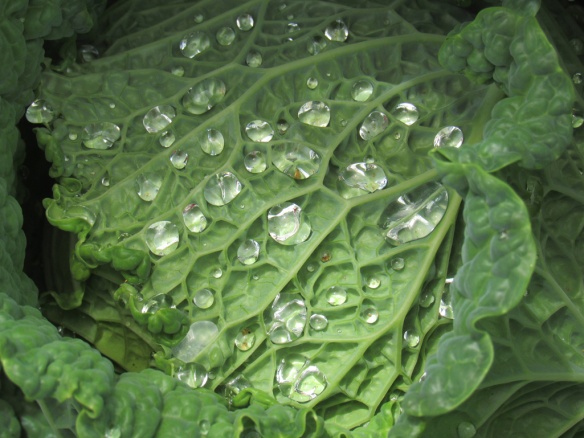 Our agribon-covered tunnel for the brassicas was a great success, giving us pest-free cauliflower, broccoli, cabbage, and kale. The cover is still up over the brussel sprouts, which are just about ready to eat. We had bumper crops of potatoes and shallots and continue to have more tomatoes than we can eat. Our okra plants ended up doing pretty well, despite a slow start. But I didn’t know that you are supposed to harvest the pods after just a few days and left them on far too long. Hard as a rock. So George bought and froze a case of okra from our local farmer’s market. Only peppers are left to process–roasting and drying–yum.

Our latest harvest came today when Capp noticed mushrooms sprouting from a wood-chip bed. We had spread the bed with wine cap mushroom spawn earlier in the summer but didn’t hold out much hope because the mushroom spawn that we had carefully pegged into logs last summer had failed to do anything. The chip bed is along our woods trail and Capp sometimes pees on one corner–the same corner in which the mushrooms have sprouted. Perhaps he has a magic elixer. His pee seemed to deter the raccoons from our corn this year, so I’m all for it. We haven’t eaten wine caps before. Let’s hope we like them. We’ll do a tiny taste tonight to make sure they don’t kill us and go from there.

My little flax patch grew happily without any attention from me.

When the stalks were about 2/3 yellow, I pulled the plants by the roots and bundled them into stooks to dry.

Almost harvest time.  Some seed heads are brown, some yellow, some still green.

After drying, I took the seed heads off, a process called “rippling,” with two wooden tools I bought on ebay. 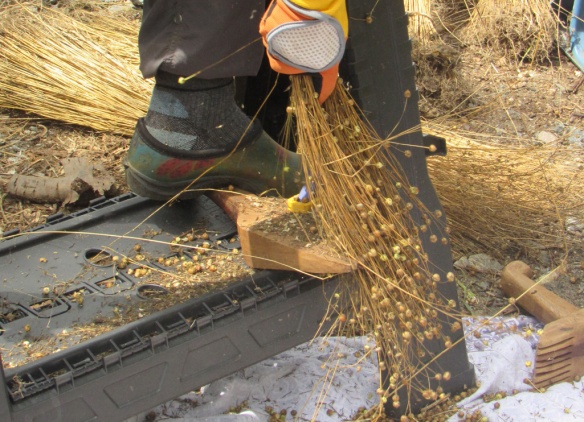 I really have no idea what they were originally used for–they were advertised as “flax hackles,” but I’ve also seen them for sale as Turkish weaving beaters, so who knows? In any case, they are beautiful hand carved tools that worked very well to comb the seed heads off of the flax. 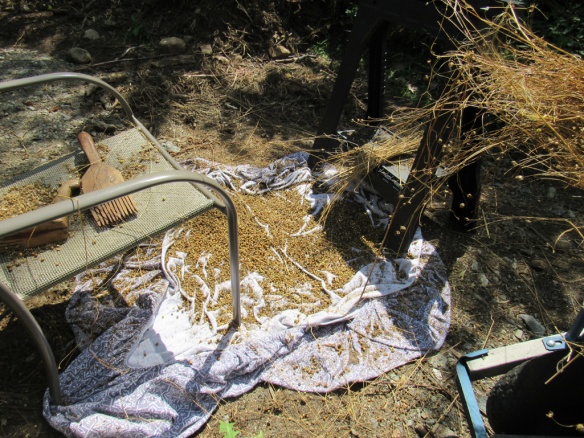 Seeds on a sheet.

After I removed the seed heads, I retted the flax. Retting is essentially a process that rots the stems a bit, breaking down the pectin to leave long fibrous strands for spinning. I retted my flax in three batches.

One was submerged in water in a kiddie pool–held down with rocks. The other two were retted by the dew–one in the flax patch and one on our front lawn.

Interestingly, the batch in the flax patch, which is lower down on the property, retted faster than the batch on the lawn.

I then dried each batch again and have it waiting for the next stage–when it’s smashed and combed–called “breaking” and “hackling.” 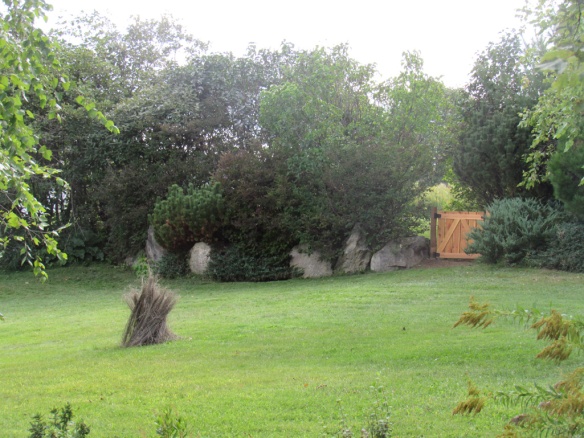 Although I scoured every antique store in mid-coast Maine for a flax break, I had no luck in finding one. So, George has kindly offered to make one for this year, while we continue to look. The break smashes the stems, separating the spinnable fibers from the rest.

A small bit of flax that I processed is hanging from the distaff.

As our vegetables and flax grew, so did our flowers.

It was a wonderful year for bees and butterflies. 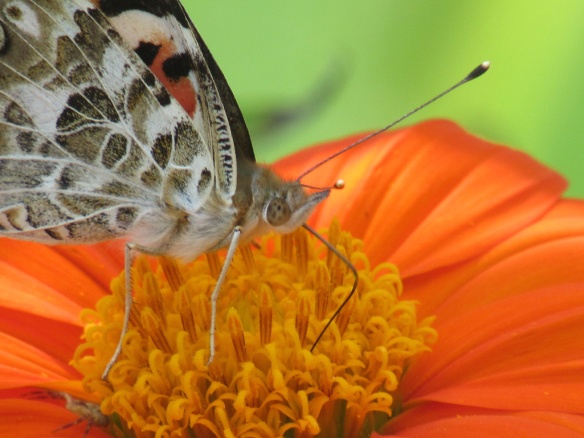 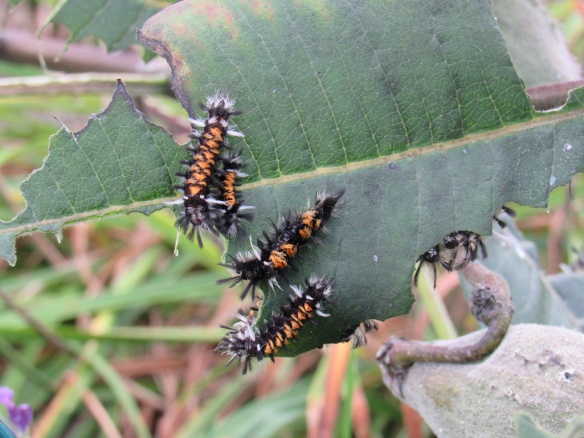 We had lots of monarchs this year AND lots of these milkweed tussock moths, which turned some of the milkweeds into skeletons.

Berries are thick, bringing berry-eating birds, including our waxwing babies.

Wild cherries over the bee hive.

Unfortunately, our cursed bluebird continues to hang around and he may be training up his progeny to be just as nasty as he is. After months of enduring his assaults on our house and car windows, we hoped that he might calm down once his babies fledged.

I grudgingly admit that he was a good provider and was surprised to see, when I pulled up the photos, that the female had a damaged claw–it was always bent under.

Was his aggression protective of her injury? Or did he cause it? I have no clue, but he was one incredibly aggressive bird. The two of them raised three chicks and they went off in the world.

We didn’t see anything of them for several weeks. The past few days, however, the whole crew is back and a male with a short tail is attacking house and car windows again. I fear he is the next generation.

We haven’t been entirely immune from weather woes. My mother’s water-front Florida house was slated for demolition by Hurricane Irma at one point. We spent some helpless, nail-biting hours wondering if the house and its contents would be swept away, while our weather continued sunny and glorious.

But, Irma danced a bit eastward and the house was spared. Fortunately, my mother wasn’t there and–due to her dementia–didn’t know that her home was imperiled. A small benefit of extreme age, I guess. 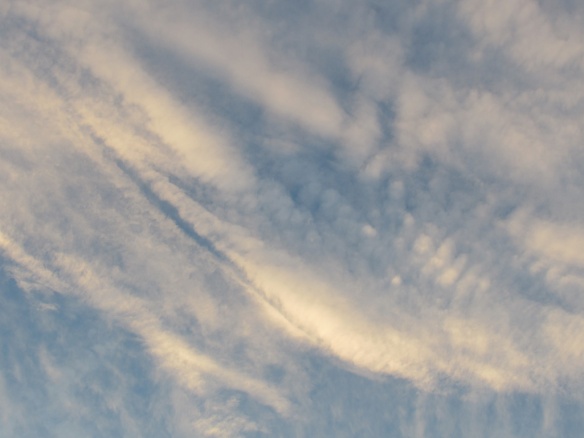 Our weather was like summer today, with an overlay of fall smells and colors. I love fall and look forward to slowing down after a hectic summer. I am already planning inside activities–spinning, weaving, and sewing. I processed all the fleece that I bought this summer, using George’s loam separator to pick the vegetable matter, crud, and poop from the fleeces.

Actually, with one exception, the fleeces were extremely clean and washed up beautifully. 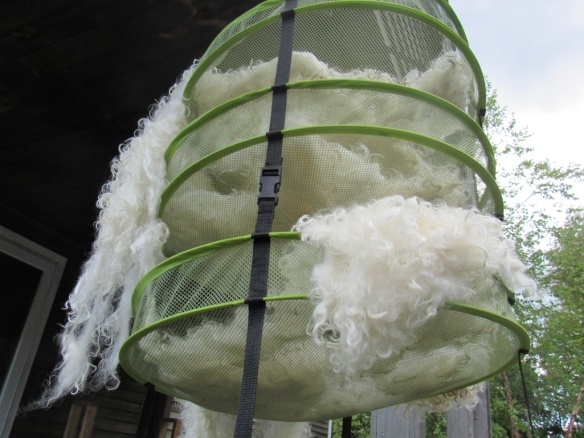 The wood is in. Bring on fall and winter.