We finally left Route 97 on Sunday and turned east toward Idaho on Route 26.  The terrain grew more interesting and varied, with lush pastures covered with cattle (and lots of calves) against a backdrop of different kinds of mountains as we moved along.  There were tabletops, cut banks, rolling hills—you name it, we saw it.

A geological wonderland, with all kinds of bizarre hill formations.

The highlight of the day, however, were the Painted Hills near Mitchell.  We followed the signs from Route 26 to the John Day Fossil Beds, and after several miles turned into a valley with a surreal landscape.  The Painted Hills resemble an open pit mine, if you were mining for colors.  They don’t really need a description, I will let the pictures do the talking. 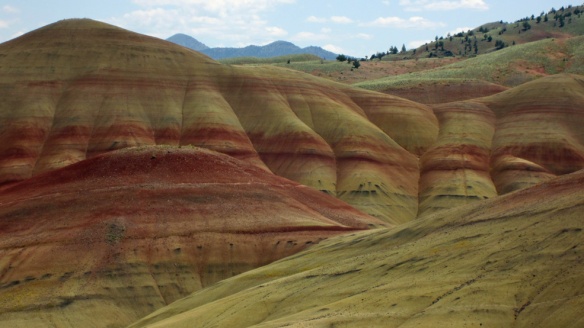 We were only able to take a very short hike because the temperature was 86 degrees, which is just too hot for Zoe to hike very far.  She’s acclimating faster than we expected to the hot temperatures, but 86 was a bit much for a ten-year-old Alaskan dog.

After soaking in the colors at the Painted Hills, we passed through rocky canyons and interesting hills with upended fossil beds in muted colors.

The John Day River runs through the massive fossil bed area, but the river itself looks so unassuming we would call it a creek in Alaska.  There was beautiful farmland too, and haying was in full swing all along the route.

On Monday, we continued east into Idaho, which means I have now been in all fifty states (George reached that milestone some time ago).  We stayed at the Bonneville Hot Springs campground, anticipating a nice soak in a wilderness setting.  Unfortunately, the hot springs turned out to be too low for anything more than ankle-wading, but the drive there on the road between Banks and Lowman was amazing, following a whitewater river through steep canyons. So far, I love Idaho.  I guess I should have visited years ago.  But it’s nice to keep a good state for last. 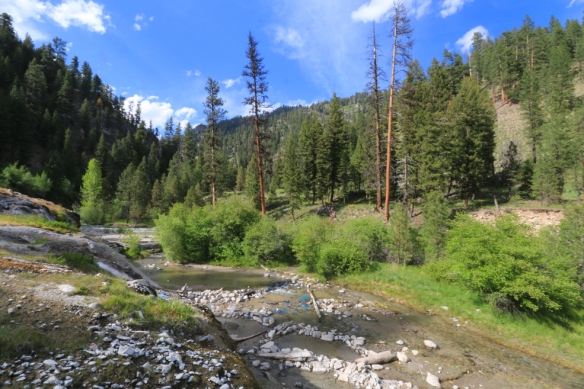