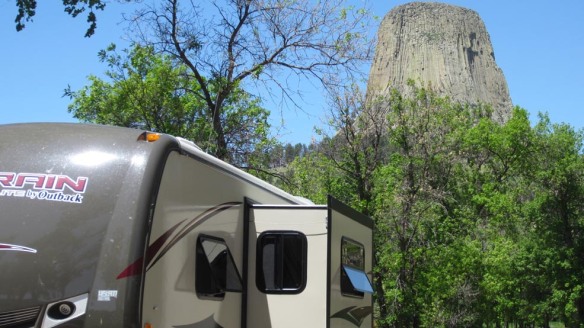 I popped into the IGA in Buffalo, Wyoming for a few groceries.  I paused in the produce section to let an elderly man pass with his cart.  He gently laid his hand on my arm and looked at me.  “Isn’t the weather beautiful today? So nice after all that rain, but you know it slowed the lilacs, they are just blooming and usually they are way past their prime by now.”

When I checked out, a talkative, middle-aged cashier asked, “Do you like country music?”  She tucked two copies of her band’s CDs in my grocery bag, “I play the fiddle and share lead vocals, hope you enjoy, they’re free.”  What wonders lurk in the IGA.  I will remember those encounters.

Buffalo was full of friendly people.  And, like Dubois and so many other western towns, it has a beautiful setting.  Flanked by the Bighorn Mountains on one side, it rolls into grasslands on the other, and the downtown is full of historic buildings and classic bungalow-lined streets.  We stayed at Deer Park, a sweet little oasis of an RV park, staffed by funny, charming people. There must be some real jerks in Buffalo, but we didn’t meet any.

After a nice interlude in Buffalo, we continued on to the Devil’s Tower, the unreal-looking monolith featured in Close Encounters of the Third Kind. 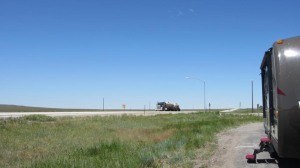 It’s not all gorgeous mountains. Flat land on the way to Devil’s Tower.

The entrance to the Devil’s Tower Monument was filled with the usual stores and crowded private campgrounds that proliferate near national parks and monuments.   We bypassed them and stayed at an amazing public campground, Belle Fourche, within the park.  It did not have hookups, which isn’t a problem for us because, with a little sunshine, our solar panels provide enough electricity for days.  At $12 a night, we had an almost unbelievable campsite, with a private lawn looking out on a stream, mountain meadow, red cliffs, and the Devil’s Tower looming as a dramatic backdrop. 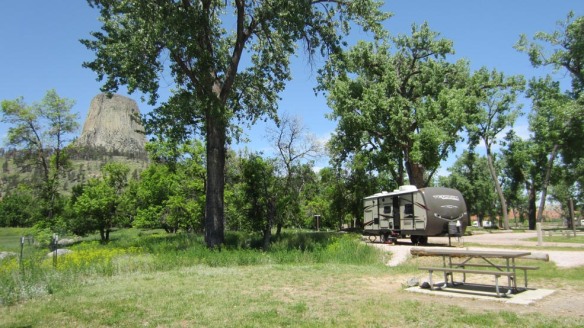 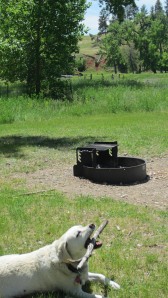 Zoe always finds a stick at every new campsite. She went nuts at this one.

There are a wide variety of campground types, each with their own distinct flavor.  Campgrounds without hookups tend to attract people with tents, pop-ups, or small trailers, rather than those with behemoth RVs. As a result, the crowd is generally a bit more quirky and interesting and this place was no different.  There were people from several different countries, climbers, and young (very polite) families.  It reminded us of a backpacking crowd—independent and diverse.

The serene campground was a nice escape from the crowds at the Tower parking lot–it was a madhouse.  I can’t imagine what it is like on weekends in full summer. But it was worth enduring the crowds for the up-close view because the rock formation is so striking and unusual. 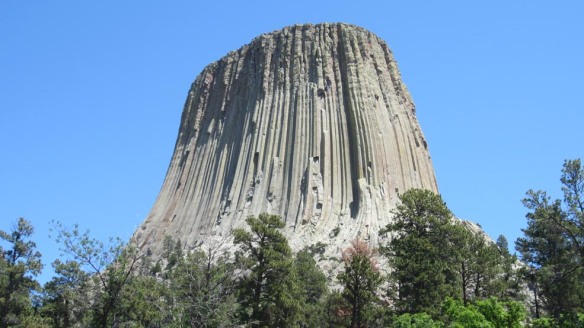 View from the visitors’ parking lot. 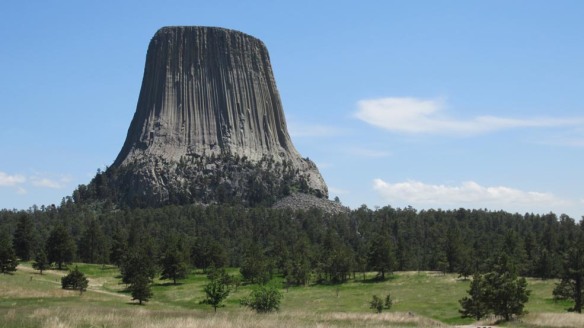 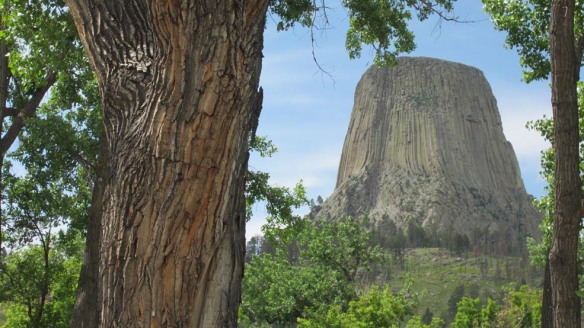 The tower looked like a tree trunk to me.  View from the campground.  It looks photoshopped.

We had a warm, sunny afternoon, a period of thunderstorms—which we miss in Alaska—followed by rainbows, and an almost full moon that night.  I am running out of superlatives, but it was quite a show. 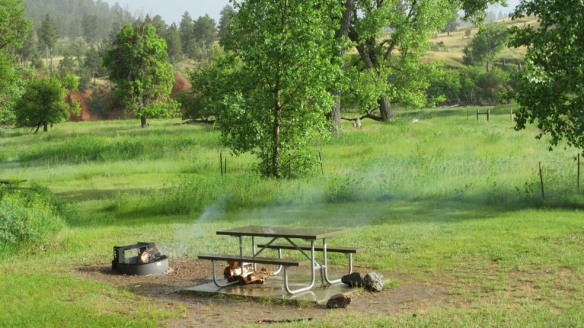 Our campsite when the sun came out during the thunderstorm. 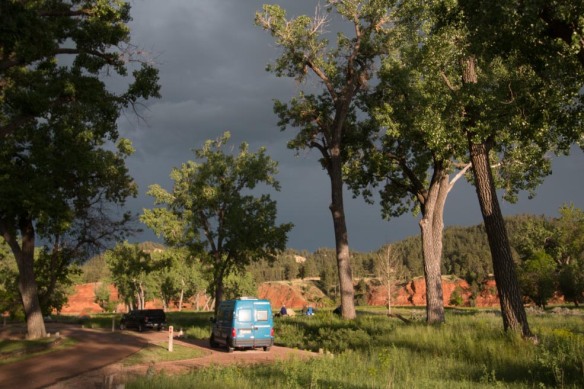 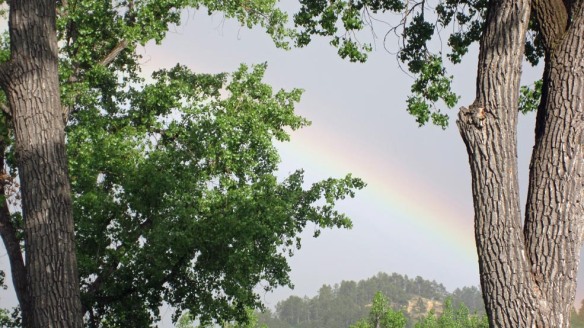 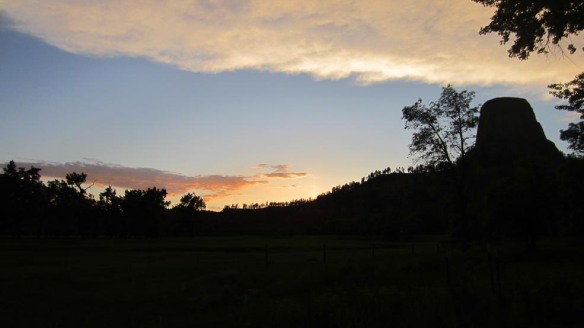 It was hard to leave Redfish Lake.  But we want to get to the East Coast by early July and have lots more to see.  We needed to get an oil change for the truck and decided to have it done in Idaho Falls and spend the night there.

On the way to Idaho Falls, we stopped at Craters of the Moon, an enormous lava field in the middle of the desert that stretches as far as you can see (over 600 acres). 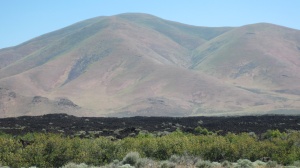 Surprisingly, it doesn’t look all that different from the recent Kalapana lava flow on the Big Island, even though it’s more than 2000 years old.

The campground in Idaho Falls was quite a contrast from the jaw-dropping beauty and solitude of Redfish Lake.   It initially seemed nice enough for a small city campground–it had trees, decent sized lots, and the owners seemed pleasant.  But it grew increasingly ugly.  The site was strewn with popsicle sticks and other questionable litter–not unusual for busy campgrounds, but still kind of gross.  The wifi was “limited,” meaning unusable, and my wifi shut down completely (I was sure they were punishing me for using too much band width).  While George was diagnosing the problem, I went out to sit on the trailer steps and read.  I brushed away something from my bare foot, which turned out to be a squirrel–on my foot.  Shades of marmots.

The next morning, early, a man was sitting on a picnic table by the bathrooms, wearing sunglasses and chain-smoking cigarettes while he watched the kids at the next campsite play while the family was taking down their tent.  Very creepy.  We packed up and left as soon as we could and headed back to the mountains.

It was another flawless day weather-wise, with enough wind to make the driving lively.  We drove into Wyoming and through Jackson, a moneyed, high-end tourist enclave set in the amazing Tetons. 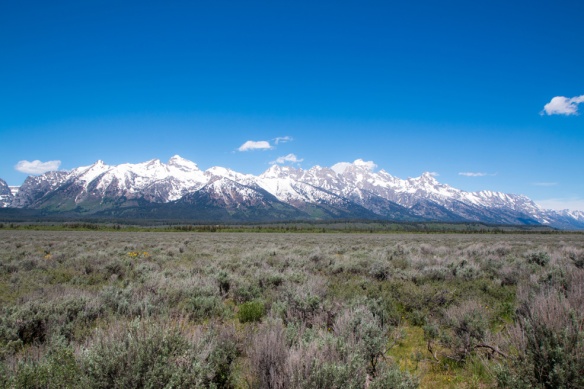 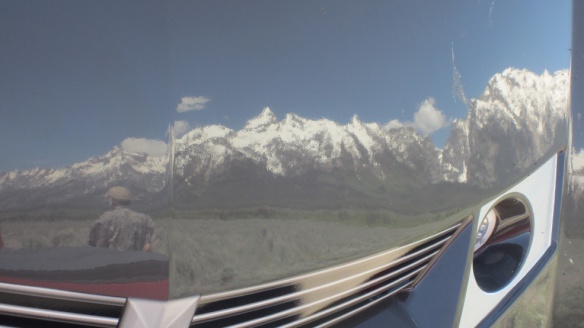 George and the Tetons reflected off the front of the trailer

Jackson was crowded with people spending money and we kept going, over Togwatee Pass, to a destination more suited to us—Dubois.

Heading up to Togwatee Pass

Dubois originally was called “Never Sweat” because of the dry winds, but the post office rejected the name and it was renamed Dubois for a then-Senator.  In protest of the name change, the residents pronounced the name “Dewboyz” rather than the French pronunciation.  How can you not like this town?

There are amazing views in every direction, and they are all different.  Snow covered peaks to the west, 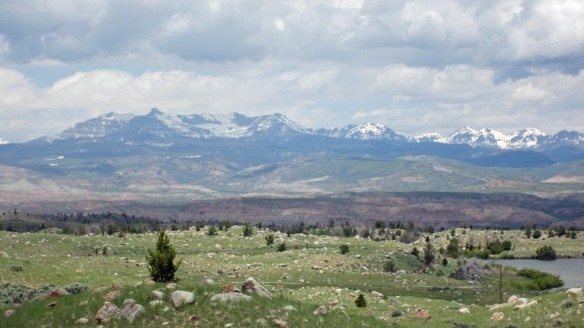 sculpted red cliffs to the north, 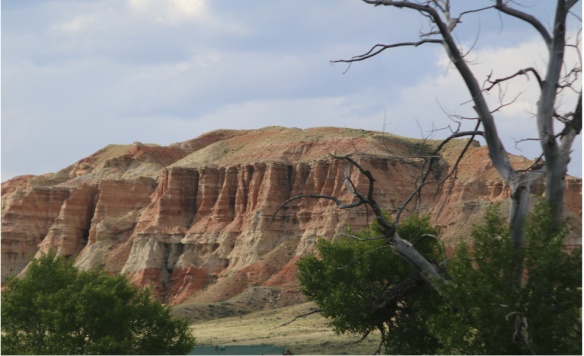 Across the river from our campground

rolling grassy hills hiding a string of lakes to the south, and the Wind River running throughout. 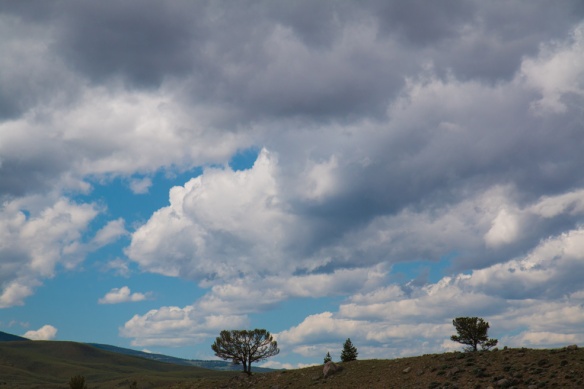 Our campground, the Longhorn Ranch and RV Resort, was set in a horseshoe bend of the river and filled with towering cottonwoods.  It was beautiful. 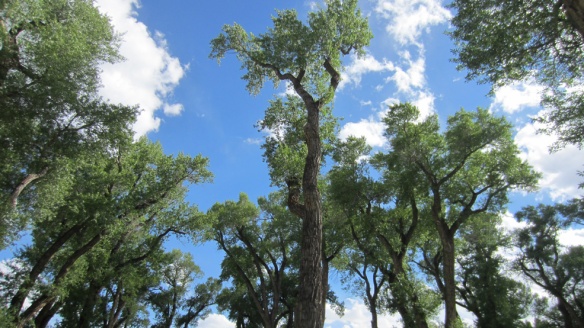 The town was at least as dog-friendly as Bend and Zoe frequented several more restaurants. 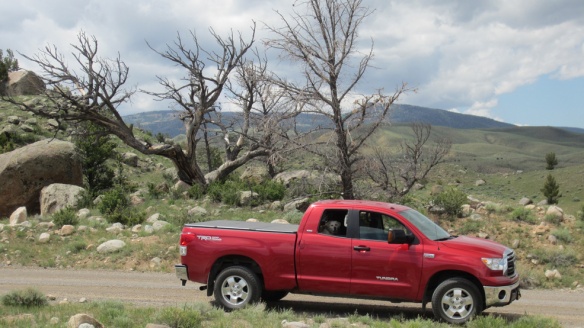 We went petroglyph hunting in the hills one afternoon and found these beauties on the boulders. 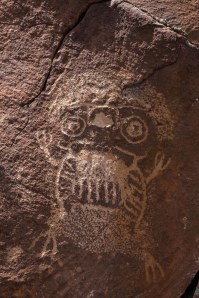 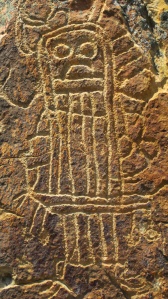 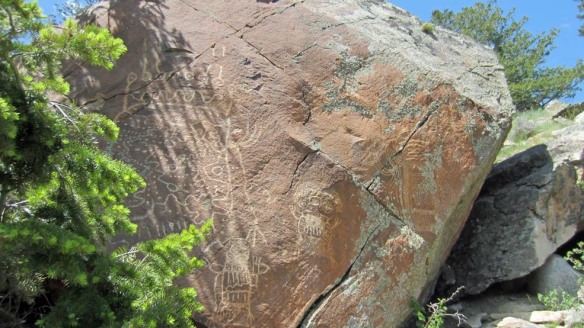 Our kind of town, Never Sweat. 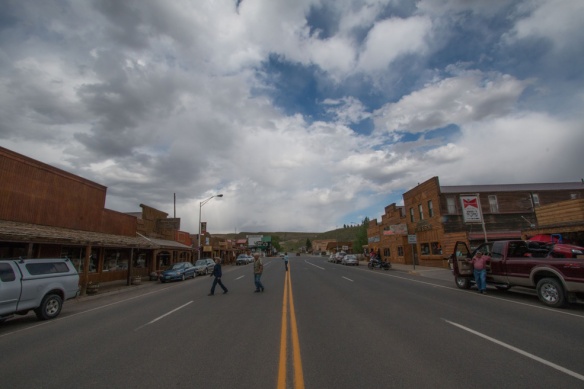