Lots of insects in North Carolina. This moth was a beautiful one.

To top off a whirlwind month of family visits in New England, we took a quick round trip from Massachusetts to North Carolina to babysit the grandkids for a few days.  We chose the scenic route into western Virginia and across through Charlottesville, but it was so rainy and foggy that we mostly had to focus on the road stripes through manically thwacking windshield wipers.  The rain let up as we approached Interstate 95 in Richmond but, oh joy, the southbound lanes were closed—ENTIRELY CLOSED—due to a tanker truck rollover hours earlier and the alternate routes were jammed to the gills.  As we crept along between traffic lights on Route 301, there were thunderstorms on all sides, and then–buzz, buzz, buzz, buzz—a tornado warning came on the radio.  Fortunately, we were not in an at-risk county, because the traffic was so congested we could not have done anything to avoid an approaching funnel cloud.  Tornadoes seem to be everywhere–and in the oddest places–this summer (not Alaska yet, though).

When we were twenty miles from our daughter’s house—on an unfamiliar North Carolina back road—the weather hit with a vengeance.  It probably was the hardest rain either of us had ever driven in.  It really did come down in sheets and the road edges, especially around the bridges, were starting to flood.  Being rural North Carolina, there were no shoulders, or any places, to pull over.  After some exciting hydroplaning, we finally arrived.  It would have been really ugly with the trailer.

And then we turned around and headed back.  The large moth in the picture above was on the wall outside our daughter’s door as we left

We headed over to Edenton, a town full of old southern houses and history on the Albemarle Sound and an area new to us.  We lucked out in finding a wonderful dog-friendly inn.  This little side trip without the trailer was a real education in how difficult it can be to find dog-friendly hotels.  The choice seems to come down to cheap flea bag hotels, with Trip Advisor reviews such as, “Do not stay here. The room was filthy and smelly, with hairs in the bathtub, mold on the shower curtain, and stains on the chairs,” or nicer, pricier hotels that tack on $75 or $100 dollars in a non-refundable pet fee.  It takes a lot of research just to find a place to stay.

The Pack House Inn, where we stayed in Edenton, has several buildings, one of which is dog friendly.

Our suite was one half of a cottage built in the 1870s, with a sitting room, bedroom, bathroom, front porch with a swing, and fenced back yard.  I loved it.  Zoe really loved it. 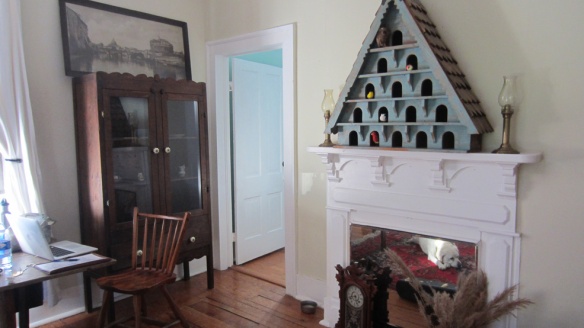 The sitting room. Notice Zoe’s reflection in the fireplace mirror. 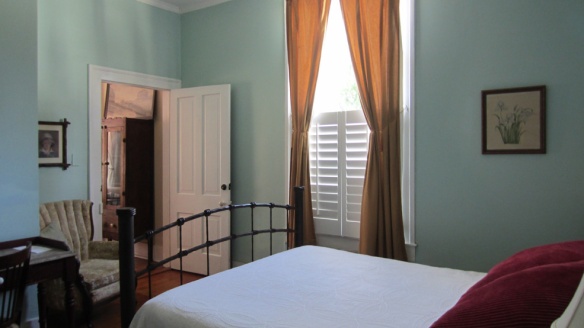 Dinner, however, proved to be a problem.  We arrived at about 4 pm on Sunday afternoon and every restaurant and grocery store in town was closed.  A reminder that we were truly in the South. We drove back to highway, which offered a choice between Burger King, Dairy Queen, and Pizza Hut.  Pizza it was.

While searching for a place to eat, we came across this sign.

An after-Pizza walk down to the water gave me a taste of this little town.

Edenton’s downtown ending at the water. 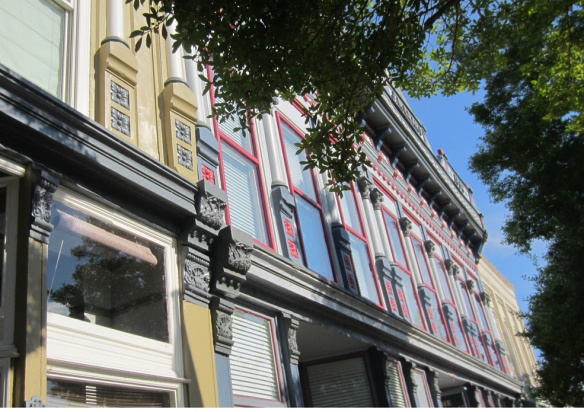 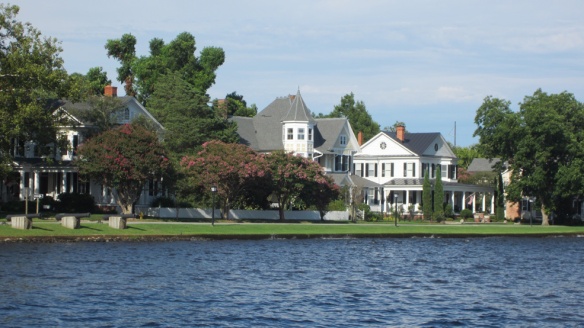 View from dock at end of main street

A painting in a downtown gallery window.  Odd, no?

This guy was enthusiastically surfing, sort of, on meager little swells that ended on a minuscule beach.  It’s not Hawaii.

When I returned to the Inn, I could hear someone singing the National Anthem at the Steamers (a summer collegiate league) baseball game a few blocks away.  I liked Edenton.

In the morning, we had a delicious breakfast (with Zoe) at the Inn’s outside patio, of fresh fruit, egg casserole, grits, bacon, and toast.  The Pack House Inn treated all of us well.

Looking toward one of the tunnel portions.  The bridge is there, and then it isn’t.

After the crossing, we had lunch at the Sting Ray, one of those local restaurants that foodies write about.  It was attached to an Exxon station and had an extensive menu.  We split a seafood platter with a crab cake, scallops, shrimp, sweet potato fries, and cole slaw that had bits of dill pickle in it.  We also splurged on two $1.49 ham, sweet potato biscuit sandwiches, an interesting and delicious contrast of sweet cinnamon-y biscuits and salty Virginia ham.

These first months of our trip have been fast paced so that we could get to the East Coast and spend time with family this summer.  We are looking forward to slowing down now and spending more time exploring the areas we travel through.  The Maine Coast is our next destination.

Zoe found her spot in the sun at the Pack House