I love exploring new cities, even if only for a few hours.  And that’s what I did in Charleston, South Carolina–a petite bon-bon of a city that is almost a caricature of a mythical South.

We decided to leave Edisto Island a day early because we had a 9 am Monday appointment to get a new trailer tire in Charleston.  We did not want to leave Edisto in the early-morning dark and then contend with Charleston’s congested morning commute, so we booked a Sunday night spot at Charleston’s popular James Island County Park campground, much closer to the tire place.  That gave us an unexpected free Sunday afternoon in Charleston. 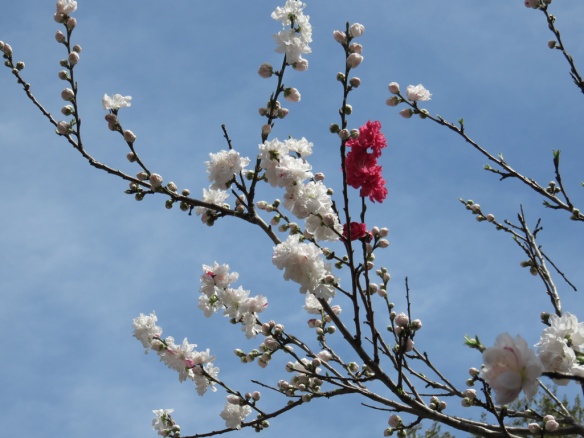 George wanted to take care of some chores, so he and Zoe dropped me off downtown and I had three hours to simply wander around the city before meeting up with the campground’s shuttle bus at 4 pm.  Sunshine, good walking sandals, no agenda, camera in hand–sweet bliss.

The first thing I noticed was churches, lots of them, in a variety of colors and shapes, dominating the streetscapes in every direction and giving Charleston one of its nicknames, “The Holy City.” 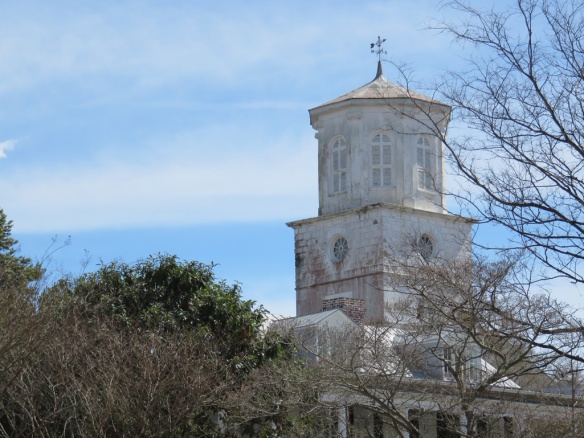 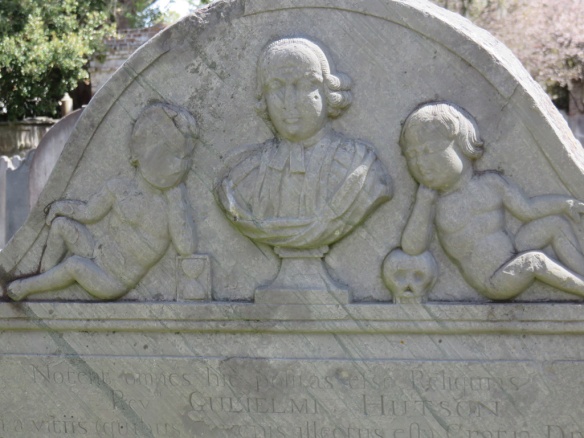 The young and the dead on a Huguenot tombstone.

Charleston’s other nicknames are “Chuck Town” and “The Big Sweet Grass Basket.”  Not nicknames that make me want to visit.  But if you want a sweet grass basket—this is the place for you—there were vendors selling them to tourists on every other corner.  The basket stands were outnumbered, however, by the horse (and mule) drawn carriages, bulging with tourists and loud tour guides hawking a little southern charm.

Every time I came to a new street, there was another carriage, hauled by one or two beasties patiently waiting or slowly clip-clopping up the street, adding to the fantasy-like atmosphere of another era.

Charleston is an old city, founded in the 1600’s at the confluence of two rivers joining the sea.  In the early days, it was unusual in that it welcomed immigrants of all religious persuasions (except Roman Catholics (there has to be some group on the outs)), giving it a rich mix of cultures.  It also welcomed lots and lots of slaves, being a main point of entry for slave ships.

In my meandering walk, I most enjoyed the French Quarter.  It pales in comparison with New Orleans’ French Quarter.  In comparison, Charleston’s is a baby-sized area and so much more polite and restrained.  But the houses were colorful and had a decidedly European feel. 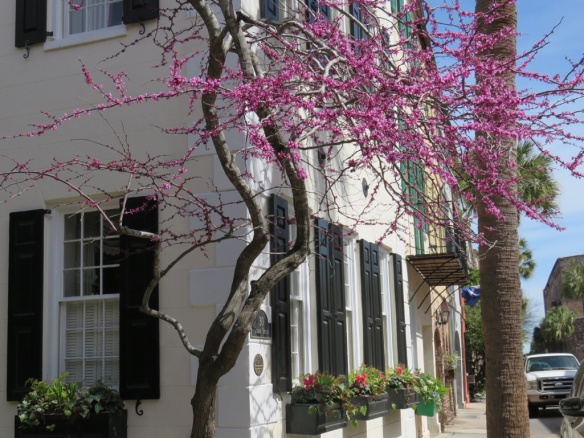 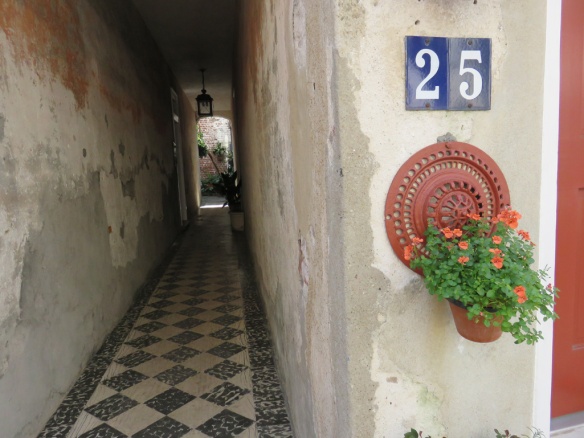 I had expected Charleston to be a lot like Savannah, but it feels very different.  They both are full of lovely old houses with oak-shaded streets, but Charleston is bounded by rivers and oceans, giving it a more wide-open, oceany feel.

Charleston’s famous Battery, a defensive wall and promenade, stretches along its waterfront.  I found it awash with tourists—all of whom were people-watching and house-gawking—I was the only freak who seemed to notice the dolphins playing in the water.

The Battery area is flanked by ornate antebellum homes, full of high money and southern manners, but with little privacy from tourists’ prying eyes and lenses. 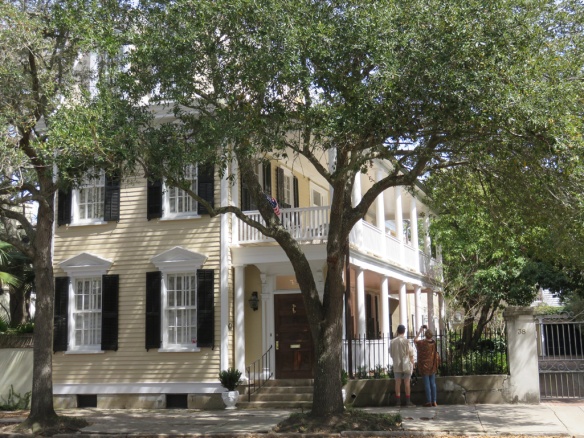 This tourist is taking a close up of this private residence–a common sight in Charleston.

This house will keeps the tourists at bay. 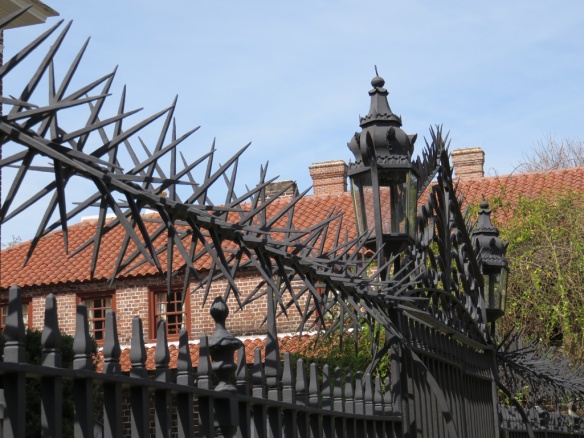 Such a strange southern mix, this city that defied the Union and started the Civil War at Fort Sumter, while also prizing appearance, manners, elite social societies, and debutante balls. 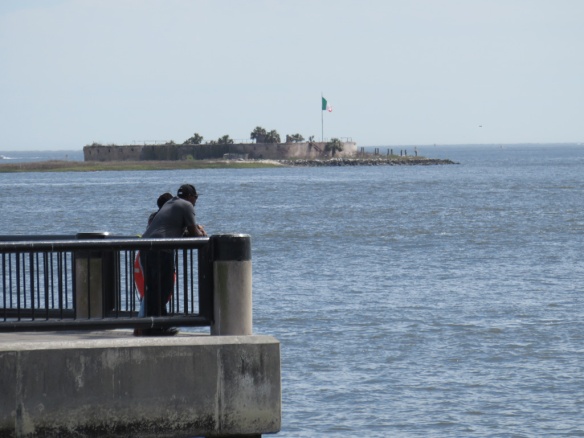 Even the sewer covers are attractive.

There is little visual record of Charleston’s black residents when walking through the old streets.  But I did stumble on this plaque by the courthouse.

While Judge Waring’s admirers should be rightly proud of his lone dissent against segregation, they left out the rest of the story, which found the plaintiff Brigg parents losing their jobs, the local Reverend who assisted their efforts surviving a drive-by shooting and the torching of his church, and all of them leaving this staunchly segregationist state.  It’s not a pretty history.

Courthouse, within spitting distance of a church, of course.

I also learned that Charleston had a significant earthquake in 1886, between a 6.6 and 7.3 on the Richter Scale—a surprise to me.

I walked up and down streets. 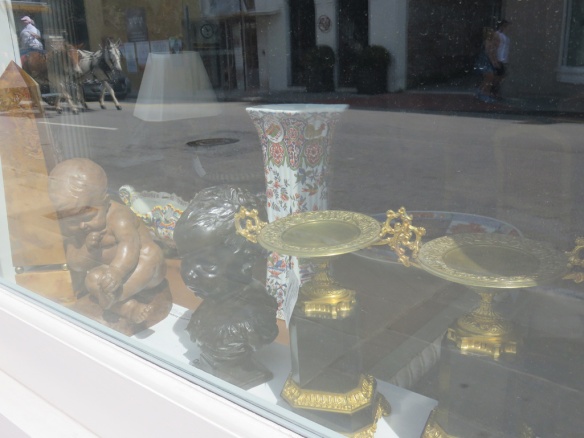 Notice the horse and carriage reflected in the window. Inescapable. 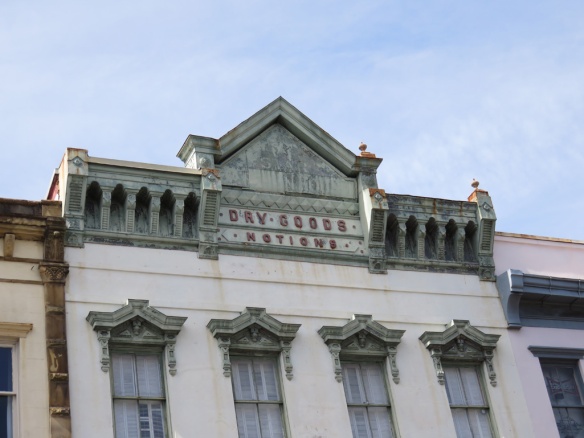 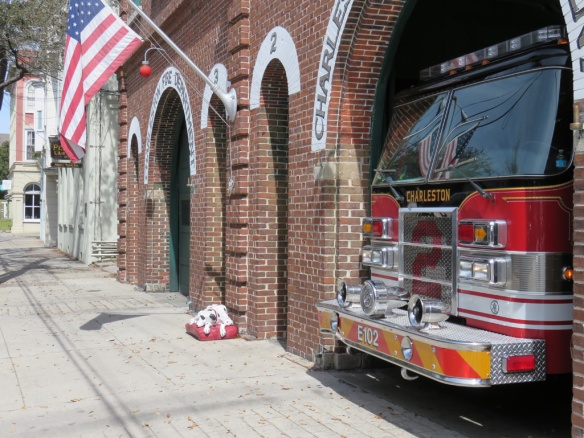 I wound my way back to the Visitors Center to pick up the shuttle and ran into the John Calhoun statue.  Most statues are at a reasonable visual level.  Not this one.  This staunch defender of slavery is raised to a godlike height, staring down at us mere (northern) mortals with a disapproving scowl. 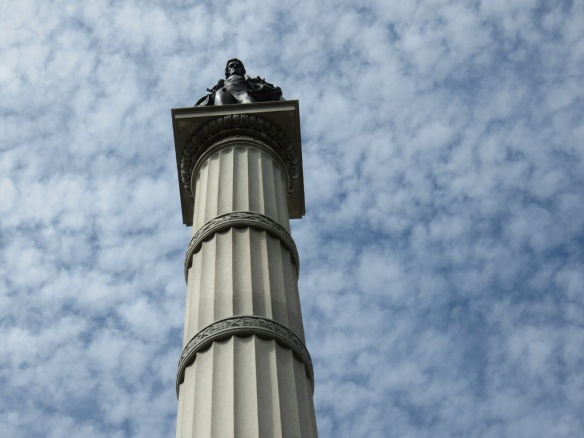 I couldn’t make out any details of the statue except through the telephoto lens.

Tents were going up in Marion Square for Charleston’s fashion week, balloons escaped above, and little piggies sparkled. 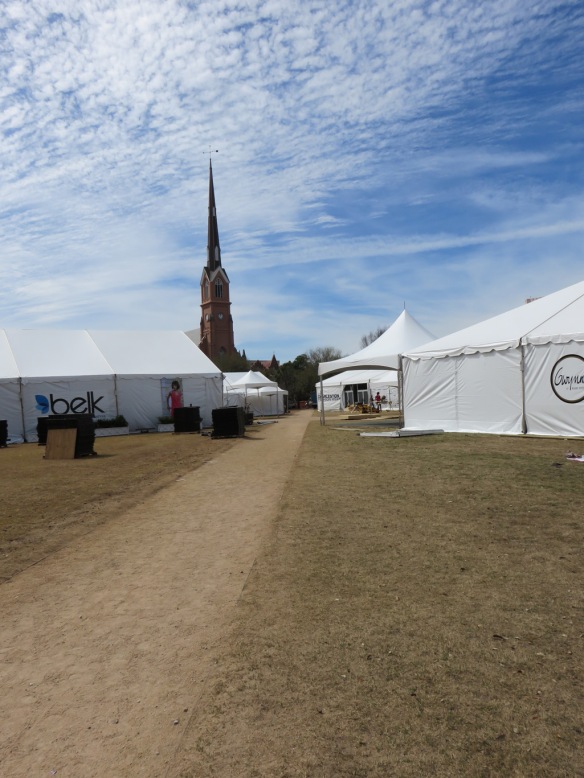 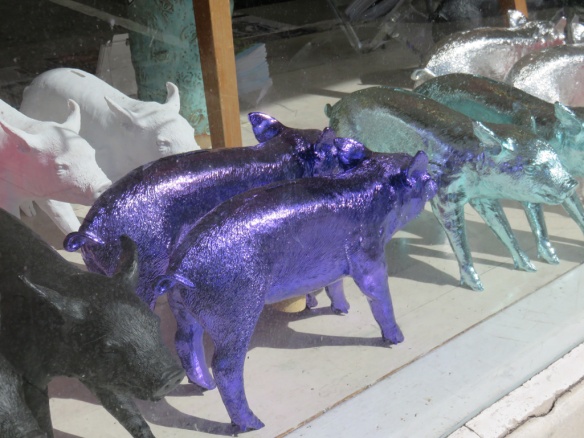