We left Haines Junction Tuesday on another brilliantly sunny morning. There were several herds of horses grazing near the road with foals and cowbells around their necks.

Our destination was Takhini Hot Springs, outside of Whitehorse. It is a beautiful two-pool spring (hot and hotter) with an adjacent, poplar-wooded campground. Once again, the campground was almost empty and there were very few people at the pools. Mostly sweet solitude. 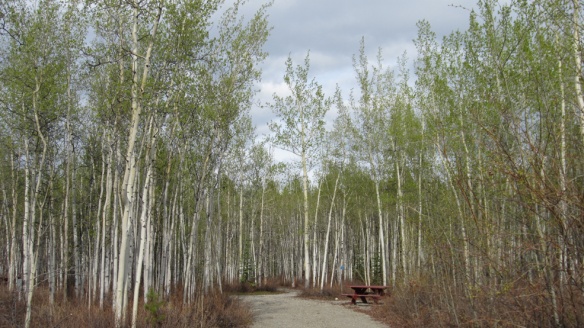 I had one social soak where I spent a good forty-five minutes talking with a teacher from East Germany, who is on sabbatical traveling for a year. She was twenty-seven when the wall came down–very interesting to hear her experiences then and now. Great conversation with someone whose life has been so different than mine–while soaking in a an outdoor hot spring–is my idea of a good time. Not my typical day in Anchorage. I love travel.

Even though the hot springs is at the end of a road without much nearby, there is a coffee shop set back in the woods within walking distance.  It was rainy and cold on Wednesday, so the coffee shop was a nice haven for lunch.  They had homemade soup and sandwiches and good WiFi.

It started to dry up on Wednesday evening and the temperatures plummeted. By early morning, it was down to twenty-six degrees. On to warmer destinations. We hope. 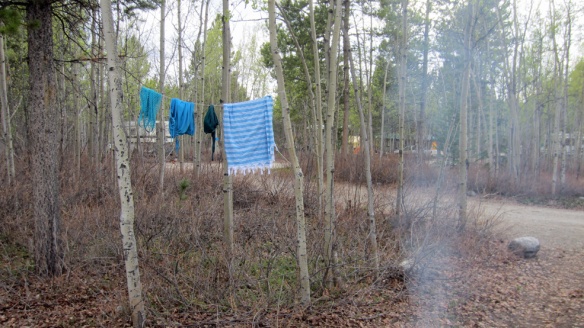 It was a battle in George’s brain and road fever won.  We are now rehabbing. We like to drive, and drive, and drive some more.  We find it hard to stop for the night when there is an enticing stretch of road ahead.  In September 2002, we happily drove from Atlanta to Anchorage in eight days–about 600 miles a day–with two cars, three golden retrievers and a set of walkie-talkies.  We didn’t need to make the trip in eight days, but we enjoyed doing it that way.

When we planned this trip, we kept telling each other that we need to take our time and pace ourselves, and we were successful the first few days.  But on Monday, the desire to drive took over.  Instead of sensibly stopping for the day at a pleasant campground after a reasonable amount of miles, we kept going, even though we knew we might end up driving the full 400 (or so) miles from Tok to Whitehorse.  Because we wanted to.  Well, George’s brain succumbed first and mine soon followed.

We had planned to stop after about 175 miles because of the delay of a border crossing and the rough roads after the border.  Our concerns about border crossing delay were almost laughable. The border guard asked a few quick questions (“Is there anyone in the trailer?” “Uh, no.”) and waved us through.  He was almost charming–a description I never thought I would use for a border guard.  Getting older has its advantages, apparently. 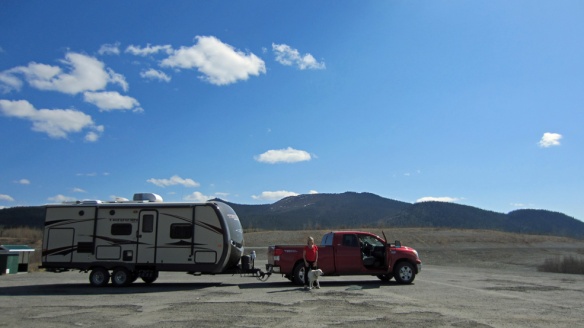 Near the border–looking small with all that sky.

Our concerns about the road conditions, on the other hand, were not laughable.  At the border we hit a stretch of gravel–very dusty gravel–with a particularly jarring washboard. The gravel portion turned out to be a pleasure, however, compared to the paved portion that followed.  Permafrost and paving don’t mix well. The frost heaves were continuous and took on all kinds of creative twists–side to side, three rolls in succession, and corkscrews–we had them all.  Later that evening, I learned that in RVer language, large frost heaves are called “whoop de doos.”  I can’t imagine exclaiming “whoop de doo” over these babies.  My language was considerably more colorful.  It was ugly driving for almost a hundred miles, especially with a trailer.

The road finally improved after Destruction Bay and our cabinet contents miraculously stayed in place.  In the meantime, while bouncing around, we saw a nice bit of wildlife–one porcupine, four moose (very skittish compared to Anchorage moose), eight swans, and one ground squirrel.  And then there were the bears.  After driving for about forty-five minutes looking for a place to pull over to eat lunch, we finally saw a pull-out ahead in a lonely stretch of road. We couldn’t figure out why the car ahead of us was sitting at a full stop in the middle of road next to the pull-out. Bear pictures, of course.  A nice black bear was munching on garbage.

Don’t even think about messing with my garbage.

We did not stop there for lunch.  After another twenty minutes, we saw an even larger black bear grazing on green plants at the edge of the road.  He was quite near the next pull-out, so may have been cruising for garbage, too.

This one was large and a real beauty.

Because of the lousy road conditions, it took about eight hours to drive the 300 miles from Tok to Haines Junction.  By then we were finally ready to call it a day and, fortunately, found a campground that had just opened for the season.  There were two other couples there.  One was from Georgia–big UGA football fans–and the other couple turned out to be former neighbors from Anchorage, heading home after wintering in Arizona.  We never met them when they lived down the street from us, but we know them now.

After walking over to the Village Bakery (which we highly recommend), we brought home some amazing sandwiches and ate them with this view of the mountains,

and this view of the car wash. 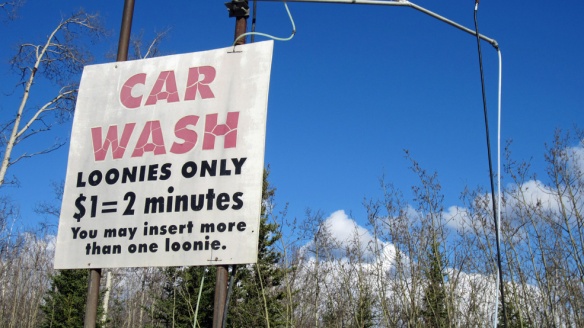