Zoe experienced two firsts in one day–90 degrees and 100 degrees.  Tough temperatures for our Alaskan girl.  As we left Pennsylvania for upstate New York, the thermometer and the humidity kept climbing.  Sweaty for us, panting-inducing for Zoe.  A fan and wet paper towels on Zoe’s head helped keep her heat level down.  It’s time for Zoe to shed some of her beautiful coat to adapt to this sauna weather.

We stayed for two nights at Keuka Lake State Park on one of the Finger Lakes.  The campsites were huge and very pretty, but there weren’t any good sticks for Zoe’s ritual exploratory strut, so she had to make do with a chunk of firewood.  We did a little exploring of the region, which has beautiful old houses, some nice farmland, and huge lakes.  But it was really crowded.

We also were looking forward to trying some Finger Lake wines.  The ones we sampled were . . . how do I put this?  Notes of turpentine?  Aroma of dirt?  One was described as a “bold, brooding” red.  I don’t know what a brooding wine is, but I would have described it as “feels like it will take the enamel off of your teeth.”  We must have missed the good ones.

We now are in the no-eye-contact zone of New York and New England.  In contrast with most of the country, where people greet you, smile, and chat when you walk around a campground, most people here pretend that they don’t see you, doing anything to avoid possible eye contact or acknowledgement of your existence. We grew up in New England and understand that it’s just the regional culture, but it still feels weird and unfriendly. Zoe expects everyone to respond to her, so doesn’t understand these Easterners at all.

After two nights in Keuka, we moved down the road a bit to an RV park at a casino complex.  It was a meticulously groomed, spacious park that was eerily empty of people, because they were all in the casino.  We aren’t big gamblers, so we enjoyed our privacy at the park while everyone else was losing their money. 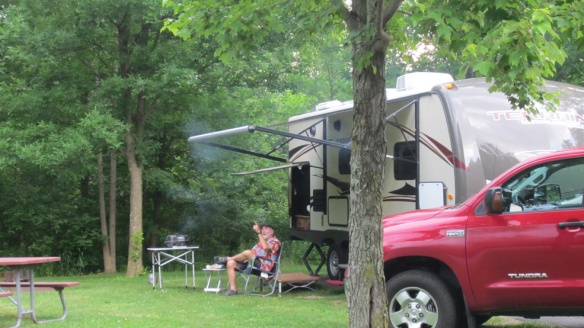 Grilling dinner and watching the weather–all by ourselves.

Many in the casino crowd were noticeably unhealthy-looking.  Maybe that’s why they were gambling.  It didn’t look like much fun, though, based on their grim expressions hunched over the slots.  On the other hand, they were cool in the air conditioning, while we were sweltering outside.  A thunderstorm cooled things off, but not for long. 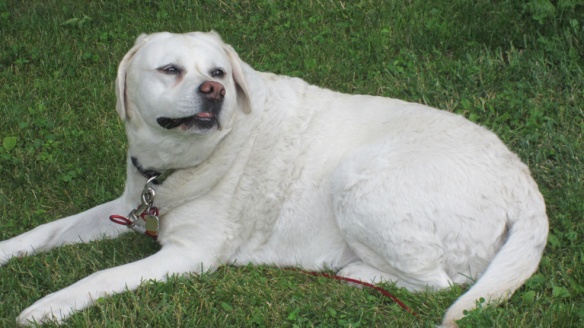 Thunderstorm through the trailer bedroom window.

Zoe was not too impressed with the casino campground.  It was far too carefully landscaped to have good sticks lying around for play and it was too hot for more than short walks.  Most egregious was the lake.  An inviting expanse of water in which she could not swim—no dogs allowed.  Stupid rules.  To cool Zoe off in 96 degree heat, I gave her a solar shower.  Better than nothing. 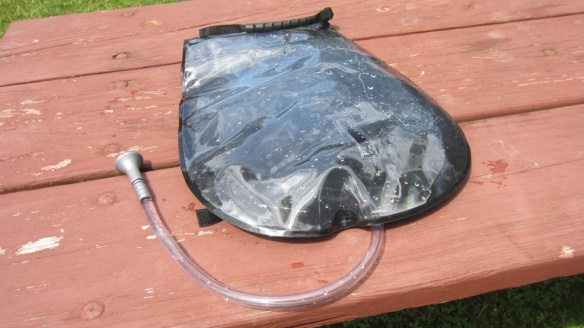 The shower water got too hot in the sun.

About to park in the shade with Zoe after her shower.

This one’s for you, Aileen.

Years ago, on a trip with the kids, we traveled through the Black Hills.  We did not have a burning urge to return on this trip.  But there they sat, between Devil’s Tower and the Badlands–two new places we wanted to visit–so we decided to explore a bit more.

The hills are not so black now.  Years of pine beetle infestations have left large swaths of dead reddish-brown trees, or the infested trees have been taken down, leaving clear cuts alternating with the dark forest.  As a result, the hills have a mottled, mangy look.

We left the trailer at the RV park in Custer and drove the Needles Highway, a narrow, twisting road carved through an area of rocky pinnacles, with one-lane tunnels hacked out of the rock face.

Along the Needles Highway.  Some of the rocks resembled people or animals. 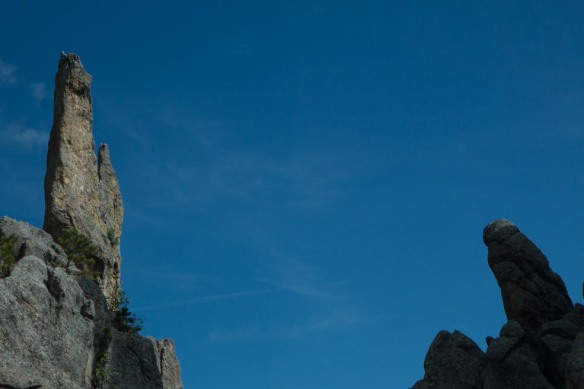 I guess it’s stating the obvious, however, to say that most of the rock formations were unmistakably phallic.  Hard to avoid that perception.

Notice the trees growing out the side of the rock face. 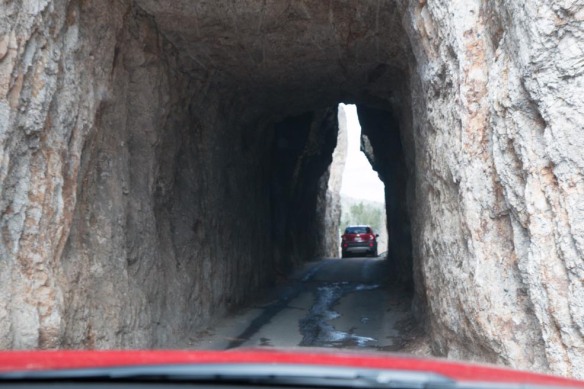 Pull in the side mirrors. 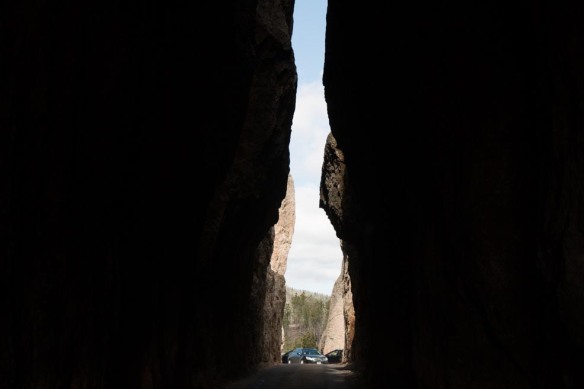 Halfway through. A car is waiting on the other side.

We wanted to do some hiking and chose the Sylvan Lake area so that Zoe could swim. The hike provided more rock pinnacle Rorschach tests.

To me this one looks like a salmon pointing to the sky next to a dog sitting on its haunches.

Zoe’s in her element–a swim and a hike. 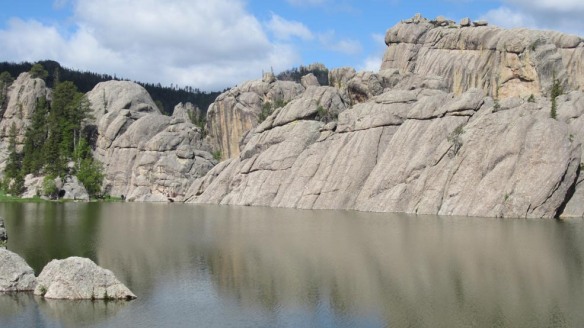 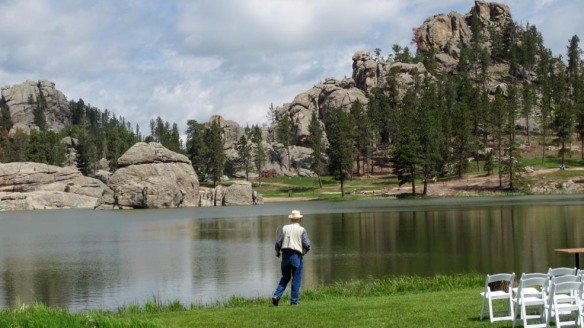 Fishing and a wedding on the shore.

Our favorite activity in the Black Hills was deer watching from our campsite.  We stayed at a tiny private RV park, the Roost Resort, which overlooked a large field with a herd of whitetail deer, including a young fawn. 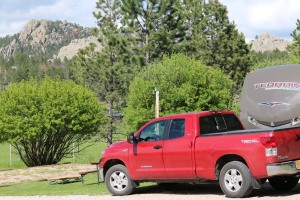 Our camping spot at the Roost.

The deer were active all day, jumping and running, with their white tails flying high at the sign of any danger.   George caught some nice shots of the mother and baby.

The bushes at our campsite were inundated with bumble bees and a few honey bees.

We also enjoyed a pair of mountain bluebirds that were unusually social. 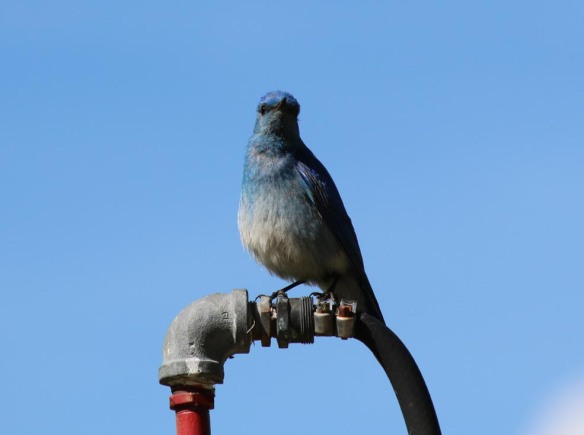 Nothing lovelier to find on the dump station water hose than a bluebird.

Off to the Badlands.

Actually, it was only a partial day out–we didn’t leave Anchorage until about three this afternoon. But we did manage to leave, after feeling like we were never, ever going to get out of town. The last-minute details kept multiplying until it felt like the Twilight Zone, where no matter what we did, we could not escape and get on the road.

After the final house cleaning, and storage and dump runs, we hit the bank.  I took a picture of the Chugach while I was waiting with Zoe in the truck. I managed to capture some unique Anchorage business signs also.

Lovely Anchorage morning. Will we ever get out of here?

Then we finished loading the trailer and headed to the scales to see how much weight we are carrying. Another picture while waiting, but now the Chugach are in the rear view mirror.

Then we needed to get a few final hiccups checked out.  Thanks to Tim and all the folks at Alaska Performance RV & Marine (who installed our solar setup) for their continued help and interest in our trip.

We left Anchorage mid-afternoon to spend our first night in Palmer–essentially a suburb of Anchorage, but a gorgeous commute.

We chose to stay at a real RV park tonight and, fortunately, it’s almost empty and very quiet except for birdsong.

Lovely setting without the crowds.

Here’s the view out our window. 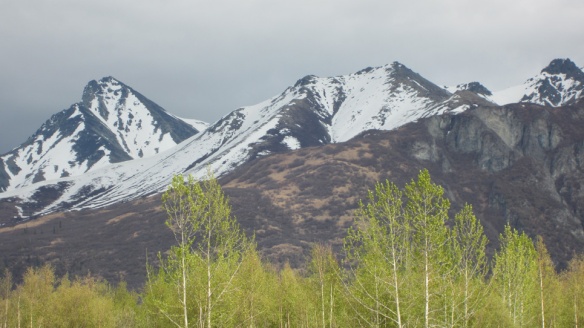 The leaves are exploding.

Zoe is bewildered by all the change.  When we got to the campground, she did not want to leave the truck.  After dinner, a walk, and a good stick, she felt much better.

This may not be so bad.